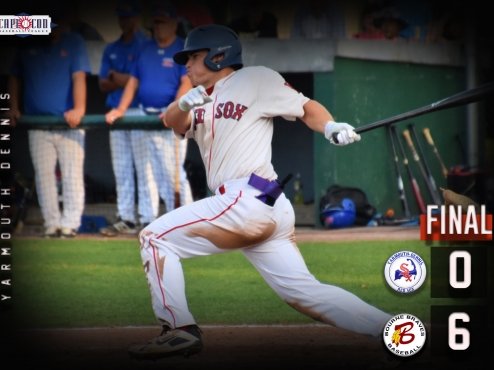 BOURNE ? One day removed from scoring nine runs against the Braves, the Red Sox were shut out on Wednesday night in a game that was cut short. Bourne defeated Y-D 6-0, while pitcher Nick Dombkowski (Hartford) essentially threw a perfect game; he was on the fortunate side of a rain delay through the fifth inning that eventually led to the game being called off.

Dombowski struck out Wyatt Young (Pepperdine) on three pitches to lead off the game and only got better from there. The Red Sox struggled to make contact, and even when they did, no ball was hit exceptionally hard. Of the 15 batters Dombowski faced, he struck out 7 and sat all the others down as well. Although it wasn?t pretty for Y-D, sometimes you need to just tip your cap to the opposing pitcher because his stuff was unhittable on this particular night.

Ryan Hare (UNLV) was on the mound for the Red Sox and ran into little trouble through the first three innings. He didn?t give up a run while only allowing three hits. Then in the fourth, Bourne took the game over. A leadoff double put Hare in a tough spot, especially with cleanup hitter Jimmy Glowenke (Dallas Baptist) at the dish. On the third pitch he saw, he ripped a no doubter over the fence and put the Braves ahead 2-0. The damage wasn?t done just yet, not until Brendan Rivoli (Virginia) hit a two-out RBI double in the gap.

Hare returned for the fourth, but a leadoff triple off the bat of Cody Morrisette (Boston College) had him in a tough spot once again. Zavier Warren drove him in with a double, which simultaneously ended Hare?s night. Brandon Dufault (Northeastern) entered the game, and Glowenke was able to get the best of him by driving in a third RBI on the day with a single. With two outs, Kyle Hess (Pittsburgh) reached with a base hit and the final run of the day crossed the plate.

After the fifth, lightning struck and we entered a 30-minute rain delay. During the delay, the rain started coming down harder and the lightning continued. It ended up being called off, giving Bourne a 6-0 victory and Dombowski a perfect game.

The Red Sox are still just two points out of first place behind the Anglers. On Thursday night, they will travel to Chatham to play the Anglers at 7:00 P.M. at Veteran?s Field.