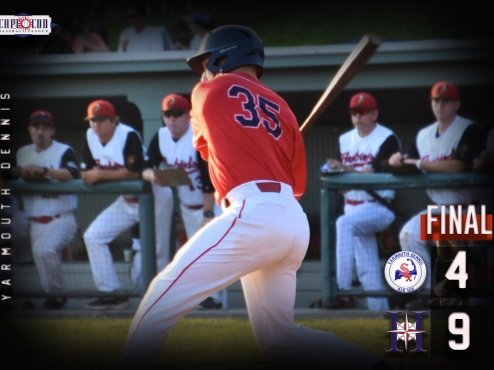 HARWICH ? The Yarmouth-Dennis Red Sox?s struggles with consistency have been evident in the team?s performance this week. Two days after the Bourne Braves threw a perfect game in five innings against the Red Sox, the Y-D offense came alive against the Harwich Mariners, accumulating 12 hits ? including two long balls. Three of Y-D?s four All-Stars ? Wyatt Young (Pepperdine), Austin Wells (Arizona), and Noah Campbell (South Carolina) ? had a multi-hit game. Southpaw Erik Tolman (Arizona State) had another solid outing, but the bullpen?s struggles continued as they gave up seven runs in the 9-4 loss.

Young ? the Cape League?s batting title leader with a .371 average ? led the offense with a 3-5 performance at the plate with two RBIs. The former batting title leader, Zach DeLoach of the Falmouth Commodores ? who was hitting well above .400 a week or so ago ? has fallen into a bit of a slump. Riley King (Georgia) had one hit in last night?s game and is now sixth in the competition with a .333 batting average.

After taking a few days off to rest his foot, Wells went 2-5 with a home run. Campbell raised his batting average to .307 with a 3-5 performance, Brad Beesley (Cal Poly San Luis Obispo) went 1-5 with a solo shot, and Jack-Thomas Wold (UNLV) and Ron Washington (Pittsburgh) both had a hit apiece.

Aside from giving up a two-run bomb in the fourth inning, Tolman threw pretty well. He struck out four batters and gave up three hits, two runs, and two walks in 4.2 innings of work. Carlos Lomeli (St. Mary?s) got the loss after giving up five hits and four runs in 1.1 innings. Chase Walter (Western Carolina) gave up one hit and two runs in one inning, Michael Weisberg (Cal State Fullerton) gave up two hits and one run in 0.2 innings, and Gordon Ingebritson gave up nothing and struck out one batter in 0.1 innings.

The game began with three singles by Young, Wells, and Campbell, but a double play got the Mariners out of the inning unscathed. The Red Sox got on the board in the top of the third inning, when Washington singled into center field, advanced to third on a failed pickoff attempt, and scored on a single slapped into left field by Young.

The Mariners offense woke up in the bottom of the fourth inning as Dylan Neuse (Texas Tech) smoked his first of two home runs to make it a 2-1 game. The Red Sox answered in the top of the fifth inning when Wells hit an opposite field home run ? his seventh long ball of the summer.

Harwich scored one run on three hits in the bottom of the sixth inning to retake the lead, but Beesley quickly tied the game back up with a solo shot over the left field fence in the top of the seventh.

The Mariners exploded for five runs on three hits in the bottom of the seventh inning. Y-D managed to get one run back in the top of the eighth on a double by Young, but Harwich scored another run in the bottom half of the inning to make it a 9-4 game.

The 18-13-2 Red Sox will take on the 14-17-1 Brewster Whitecaps this evening at 5 p.m. at Red Wilson Field. Young, Wells, King, Campbell, and Red Sox Manager Scott Pickler will all represent Y-D in the All-Star Game tomorrow at Eldredge Park. Tickets can be purchased at the gate for $5, and first pitch is set for 6 p.m.

Taylor will provide some depth behind the plate and can also play first base. Taylor played 21 games at first, 14 as the catcher, and one as the designated hitter for the Hokies this spring. He hit .290 with 12 extra-base hits and 20 walks, and made just one error in 329 chances for a .997 fielding percentage.

Washington was named a Third Team All-ACC member and ACC All-Freshman Team member in 2018 after hitting .284 with six home runs. This spring he slashed .306 with 17 doubles, two home runs, and 26 walks. The Red Sox will mostly benefit from Washington?s bat, but he will also provide some depth in the outfield.