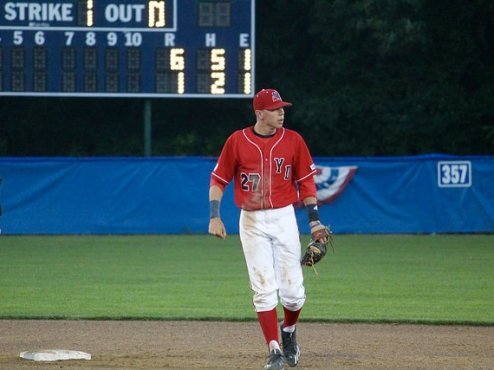 Nico Hoerner sprinted to a ball far out of his reach. ?The high pop up fell into shallow right field and looked to be a base hit.

“Two, Two,? yelled Christian Koss running over from shortstop to second base.

Hoerner kept the play alive, took the ball off the bounce with his bare hand, turned and jumped as he threw the ball over his shoulder. ?Koss collected the ball with his outstretched glove, lunging toward the throw. ?The Umpire on the call extended both his arms sideways and the whole crowd at Veteran?s field let out a collective sigh.

“He slid in and when he popped up I saw he was on my foot,? Koss said. ?One thing led to another: If you?re not on the base, you can be tagged out.?

Koss put the tag on the runner and the Umpire rose his fist to signal the out. ?It was an out that Koss realized Y-D ?stole? and Tuesday was the night to do it.

The Red Sox won its ninth game in a row with help from the team?s all-around defensive performance. Kris Bubic led things off with a solid five frames and the game was littered with defensive web gems that stole the show. Hoerner?s play is one of the many plays that kept the Red Sox dominant throughout the night.

“With (Hoerner), you can expect him to make any play,? Koss said. ?It?s amazing the plays that anyone can make at any time.?

The play at second base was one of the better plays the Red Sox have made all season. ?Despite that, the play almost didn?t end in an out if it were not for a mental error by Chatham?s Mason Koppens. The play is a perfect symbol of all the things that have been going right for Y-D over its win streak.

Kris Bubic provided firepower on the mound, showing off the stuff that made him the East?s selection for starting pitcher at the all-star game July 22nd.

“I went out there and just tried to pound the strike zone,? Bubic said. ?I have a lot of confidence, all I need to do is (throw strikes) and the defense will make plays for me.?

Bubic had nine strikeouts in the game for the Red Sox. He said that the total is ?more than usual?, but didn?t look too much into it?s importance to his success on the mound saying ?hey, whatever works.?

A lot has worked for Bibic this summer. Tuesday marked his last start of the season. ?He leaves the Cape with 1.65 ERA and 41 strikeouts, firmly planting himself as one of the most dominant pitchers of the Cape league summer.

“Overall it?s been a great experience, everything from the baseball to my host family,? Bubic said. ?I couldn?t ask for much more.?

He leaves a Red Sox team that is one of the hottest teams in the Cape league and his starts have been an integral part of its success.

The Red Sox are now ten wins short of the all-time Cape league record for consecutive wins in a row. While that may seem like a lofty goal, the Red Sox have showed no sign of slowing down any time soon.