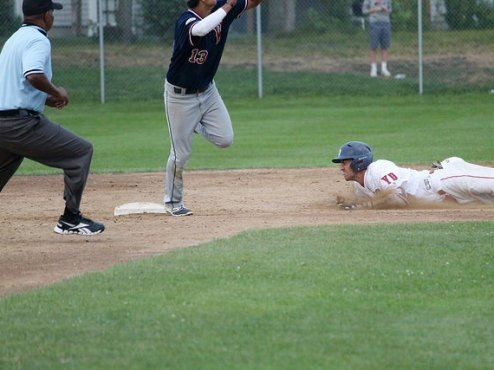 Carter Pharis waited on first base while Manager Scott Pickler gave the sign from the third base side of the field. ?Pharis took a lead, made a jump and took off running as Gatemen pitcher Mason Feole came home with the ball. ?The ball was grounded to short for what seemed like a double play, but Pharis had other plans.

He slid in safely, in a bizarre 6-4-3 play to get Darren Trainor out at first. It was all hustle about hustle for Pharis and his play set the tone for the Red Sox for the rest of the game.

“We have a really fast team, we make people pay for their mistakes,? Pharis said. ?If we get extra outs it?s a huge key to us scoring a lot of runs.?

The Red Sox (22-11-1) earned most of the runs, in its 8-3 victory over Wareham at ?Red? Wilson Field, due to intense hustle on the basepaths. Multiple Y-D players scored runs from second base and the Red Sox took advantage of a Wareham team that couldn?t make clean plays on a few occasions.

Pharis, following his play at second, went on to score the first run of the game on two straight passed balls. While Pharis acknowledged he loves it when someone brings him home, he was happy to do it on his own.

“It?s fun,? Pharis said. ?I love reading dirt balls. I take pride in that, getting runs when we?re not getting hits.?

A lot of the better plays the Red Sox made don?t show up in the stat book. Pharis? play was the beginning, but as he noted he wasn?t the only one who made clutch plays on the base path. ?He mentioned Kyle Isbel, who in the seventh inning with one down for the Red Sox grounded into what looked to be a routine double play and beat out the throw to first. ?On a play that would have ended the inning, the Red Sox earned a run and a chance to put added pressure on the Gateman offense.

Connor Kaiser was a star for the Red Sox in the game. He collected three hits including a triple that he roped to the fence in left-center field. ?Kaiser scored two of his three runs from second base, running full speed at the crack of the bat to give the Red Sox a cushion.

“All of us have an aggressive mindset,? Kaiser said. ?(Pickler) loves it. We put pressure on the defense.?

The Red Sox established its lead in the third and never looked back from it. ?Nico Hoerner, who has been a creator of hustle plays all season for the Red Sox, took second after the throw came home in an attempt to throw out Kaiser coming from second. He took an extra base that allowed him to score the very next play as Alfonso Rivas hit a single slowly past the second baseman.

With all this hectic play, Wareham couldn?t settle on defense which led to four costly errors in the field. ?In addition to some tough balls that got past it, the Gatemen defense had a few blunders that may have cost them a chance at the game.

In the fifth inning, Kaiser slid into second as Wareham pitcher Will Neely?s throw arrived at the base. Umpire Ronaldo Cockrum was so certain that the shortstop would be behind the throw, he rose his fist to motion that Kaiser was out. ?In a split second, Gatemen shortstop Kyle Kasser cut off the throw signaling Cockrum to change his call and allowing all Y-D baserunners to reach safely. Neely was handed the error, one he could only scratch his head at.

“I can?t create errors,? Pickler said. ?They opened the door and we got a few hits. It was big.?

Pickler mentioned Pharis? play at second, as well as Kaiser?s, were the best plays each made all game. He referenced Hoerner?s clutch slide into second that saved the game on July 15th and allowed Alex McKenna to record the game winning hit. ?He thinks players saw how big that play was and looked to make it for themselves saying that Y-D likes to ?feed off each another?.

Pharis didn?t score the deciding run of the game, nor the go-ahead run at the time, but his alertness set a solid tone for the Red Sox on the basepaths. Eight games into the Red Sox winning streak, Pharis worries a loss may be inevitable, but with the playoffs around the corner he?s just enjoying the ride.

“We have a really good team that cares about each other,? Pharis said. ?I love that we?re hot right now, it?s been awesome.?