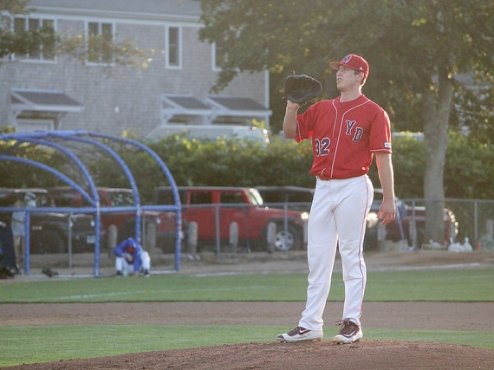 Kris Bubic knew it would be his last night in a Y-D Red Sox jersey.? In the third inning of the game at Veteran?s field in Chatham, Anglers Outfielder Mason Koppens hit a screamer back Bubic?s way. ?This stunned the crowd to silence and in a moment of pure reflex, Bubic extended his bare hand and the ball ricocheted to the first base side.

?Wouldn?t do that again,? Hoerner said after the game.

?Yeah, that was probably too much,? Bubic replied.

The play was registered a single after the Y-D defense couldn?t record the out.? Just two full innings away from his exit, Bubic put it all on the line.

Kris Bubic made his last start of the season for Y-D in the 7-2 win at Chatham. In his six starts for the Red Sox, Bubic elevated himself from the Red Sox fourth starter to one of the brightest young players in the Cape league.

?Overall, it?s been a great experience,? Bubic said. ?I?m going to miss the guys I?ve been playing with. My teammates, my coaches: they?ve given me a lot of confidence out there.?

Bubic had a lot to prove coming out to the Cape this summer.? A weekend starter at Pacific-12 conference powerhouse Stanford, Bubic was at the end of the Y-D rotation to start off the season.

The Cardinal could not have seen this coming. In his last seven starts for the team, the team won all seven of its games.

As a Friday night starter, he registered a 7-6 record in 15 starts.? He recorded a 2.79 ERA and 96 strikeouts, good for sixth in the Pac-12 in both categories. They were also both the top marks amongst the Stanford pitching staff.

Nico Hoerner, Bubic?s teammate at Stanford, could only describe the emotion of finding out they would remain teammates for the summer season as ?excited.?

He felt he was fortunate to remain teammates with a pitcher the caliber of Bubic. The fear all along was not if he would have success, but if he would last.

Pitching 120-plus innings for the Cardinal, Hoerner recalls having the conversation with Bubic. Hoerner knew Bubic wouldn?t go all the way, but he said he wasn?t quite sure how far he?d go into the summer season.? He knew this day would come eventually, it was only a matter of time.

?I give him a lot of credit,? Hoerner said. ?Guys who are pitching that much at school probably aren?t going to be here for a whole lot. That says a lot about him that he stayed. I think he did all he could.?

While Bubic came onto the Cape to better himself, he gave one of the premier teams in the league everything they asked for. Taking calls from Manager Scott Pickler during his appearances, Bubic adapted quickly to mixing up his approach and throwing a variety of pitches. He got used to throwing the pitches he felt least confident with and developed the pitches into his game to shape some of his dominant performances.

Comfortable with his fastball coming in, he said the biggest thing he could take away from the summer is simply: ?curveball?. He made that a pitch he is comfortable going to at all situations of the game. He feels confident that will be a pitch he could use going forward.

Bubic was a quiet presence before games.? On games he started, he took it all in, sat in the dugout and tried to avoid distractions at all costs.? Red Sox reliever Hunter Parsons said that Bubic was one player who got ?locked in? before gracing the mound.? He said Bubic would sit in the dugout, headphones blaring, and avoid conversations prior to games.

This focus translated to the mound where Bubic had some of the most consistent control on his fastball of any pitcher in the Cape.

Bubic was dominant in every category, without many weaknesses. In 32.2 innings pitched, he struck out 41 batters.? That would have him punching out close to 42% of the batters he retired.

Allowing 23 hits in addition to seven walks and two hit batsmen, the left-hander retired more batters via the strikeout than he allowed to reach safely.

The catchers who caught Bubic were equally in awe at the talent he provided.? Cooper Johnson just had one opportunity to do so and left impressed with the skill he has throwing his changeup.? In addition to the curveball and fastball, the changeup is another plus pitch that opposing players couldn?t get a grasp of.

Bubic attacked on all cylinders and often left batters disoriented.? His combination of elite-power and -finesse made him one of the more frustrating assignments for opposing batters.

Assistant coach Roberto Mercado has seen three championships since his arrival as a member of the Y-D coaching staff.? He knows what it takes to put together a quality team and he knows what the team had in Bubic. He was one of those building blocks.

?Next man has to step up,? Mercado said. ?He was dominating out there, we?re going to miss him a lot.?

From a team perspective, the Red Sox are losing its best pitcher.? The starting pitcher for the east all star team, Bubic may have proved to be the best pitcher in the Cape.? He leads in just about every qualifying category for summer-league hurlers.

Despite the limited innings, he?s been reliable in every aspect. The whole team will miss his production, he will miss the environment.

?Everything from the baseball to my host family, I couldn?t ask for much more,? Bubic said. ?I?m going to miss playing with these guys.?

Hoerner will say goodbye to his teammate earlier than Y-D faithful would have hoped.? He is excited about the future they have playing side by side. He joked and assured they?ll ?stay in touch.?

Everything Bubic did, he gave more than he was asked of. From the fourth starter to elite-frontman, the expectations for Bubic have never been higher.

From stretches of consecutive strikeouts to herculean barehanded attempts, Bubic gave all he had and at times, too much.

?It?s a great support group out there,? Bubic said. ?I?m proud of them for sticking with me.

With all he?s done, it wasn?t a very difficult decision.