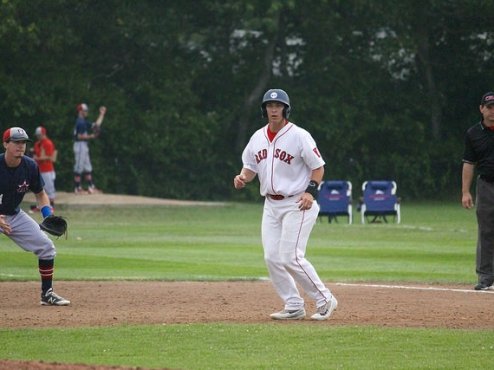 rn By Michael McClearyrnrnMike Casala?took a stroll around home plate. ?He took a deep breath before he entered once again into the box. ?He had just fouled off his third straight pitch and, in the second inning with two men on, the Red Sox looked like they could break things open. ?After working the count to full he takes a pitch low and works a walk. ?Casala?threw back his bat in celebration and ran eagerly down to first base to load the bases. ?The next play, Nico Hoerner grounded to the second baseman and what was once excitement for Casala?all vanished in three pitches.rnrn”Two out hits are what win you ball games,” Casala?said. “A couple more drop, a couple more two-out hits and we’re right in the game. It just wasn’t our day today.”rnrnThe Red Sox couldn’t get many to come around in its 7-3 loss to Harwich at “Red” Wilson Field. Despite threatening on multiple occasions, they couldn’t finish some innings and left a lot of players on base in the process. Twelve baserunners is a sign of promise for the Y-D offense, yet it was not enough today as the Red Sox struggled to create hits when they had runners on.rnrn”We hit four or five balls right to left field that easily could have been extra base hits,” Casala?said. “Usually you could score when you have eight hits.”rnrnIn the third inning of the game, Carlos Cortes provided an example as to how the game was going for the Red Sox offense. ?After starting the inning with a double from Kyle Isbel, the Red Sox looked to be in another position to score a run with three more outs to work with. ?But, two straight pop outs brought Carlos Cortes in a tough position. ?rnrnWith a 1-2 count on him, Cortes looked to answer the call and the ball was roped into left field. ?The Harwich outfielder went back all the way to the warning?track and made the grab by the wall. Cortes ran through first base and out in an angle towards right field before slowing to a stop. ?He turned and shook his head in disbelief donning a disapproving smile. ?He had hit the ball hard, but, again, to no avail.rnrn”In the seventh, the momentum went?our way and we?go out in the eighth and?give up?the momentum,” Manager Scott Pickler said. “You got to give (Harwich) the credit, we got outplayed today.”rnrn?The game ended early due to darkness?in the eighth inning. ?This hung heavy with some Y-D players following its come from behind victory in the ninth inning of Tuesday’s game and once again was looked at as a missed opportunity.?rnrnThe game wasn’t completely filled with misses for Y-D. Carter Pharis provided a spark for the Red Sox in the seventh inning when it scored its only runs all game. ?He provided a pinch-hit single that got the offense going. ?Two batters later Kyle Isbel hit a single that drove home two.rnrnThis was the second straight game that Pharis provided a key hit in a cameo appearance. ?In the seventh inning of the last game, he hit a single to add a baserunner for when Isbel?hit a three-run?homer to pull the Red Sox within one. ?He has been making the most of the opportunities that he’s been given and continued to show positive signs on Wednesday.rnrn”You figure out a lot about yourself up here,” Pharis said. “I’m going to do the best I can for the team to succeed, I love opportunities.”rnrnFollowing yesterday’s come from behind win, signs were pointing upward for the Sox. ?After a game like this one, Pickler still believes that they can take the momentum from Tuesday’s win into their next contest claiming it’s something they “can carry with them for a while”.rnrnPharis shares similar beliefs as his coach and teammates in assessing the team’s offensive struggles. ?While the ninth inning may be forever a mystery, it’s no secret that Y-D can do damage at any point of the game.rnrn”Yesterday was an opportunity that not many people could say we could come back from, but we did,” Pharis said. “I’d be worried if guys weren’t on and we’re struggling. People are getting on, they’re going to fall eventually.”rnrn?rn