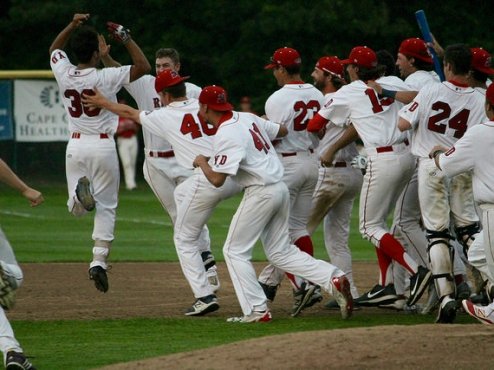 rn by Michael McClearyrnrnAlfonso Rivas smiled and paced around the dugout.?rnrn”They want you,” a teammate yelled from the dugout to?Rivas. “They’ve been looking for you.”rnrnRivas knew the attention would be on him and he?couldn’t break the smile from his face. The team shared his joy as they grabbed the ice bucket from the corner of the dugout. ?A few of his teammates came out onto the field and doused him in what remained of the bucket. ?While it shocked him at first, it was a reminiscent?moment that brought him back to his childhood.rnrn”It’s what you dream of as a little kid,” Rivas said. “You play in little league: you want to hit the walk-off hit, the walk-off home run, the ice chest. ?It’s a pretty cool feeling.”rnrnWith two outs in the bottom of the ninth, Rivas hit a walk-off single to cap a three-run?inning and come from behind victory for the Red Sox. It was Y-D’s second three-spot in what turned out to be a game of big innings. Rivas’ decisive moment was just his first hit of the game, but it was a big one.rnrn”You know the game’s tied, so you’re just looking for a pitch to hit,” Rivas said. “You do it for your team and that’s how you’re rewarded.”rnrnThe final hit was a moment of joy?for the Red Sox, but a few innings earlier the odds of a similar?ending?were much bleaker. In the top of the seventh inning, after taking a pitch with one out and the bases loaded, Orleans’ Stephen Scott roped one over the short fence at “Red” Wilson Field. ?That put Orleans up by one and seemed to be the breakaway score for a game that was within just one run the entire time.?rnrnY-D didn’t suffer for long. In the bottom of the same inning, on a 3-1 count with two on, Kyle Isbel roped a ball high over the right field fence just 330 feet away from him. This, again, put the game within one and was a momentum grabber for the Sox.rnrn”Baseball’s nine innings,” Manager Scott Pickler said. “We answered the call. Then they went ahead and we answered the call again.”rnrnPickler isn’t ready to label this a momentum booster just yet saying that he’ll “see tomorrow” if this game can provide a momentum boost going forward for the Red Sox.?rnrnIn the top of the ninth, Orleans did everything they could to increase the lead against the Red Sox. ?A home run by Orleans’ first hitter threatened to be the nail in the coffin for the Red Sox. Immediately following, Ethan Paul hit a single to left field giving Orleans another baserunner and chance to add to its lead.rnrnBut, a slick defensive play by shortstop Connor Kaiser and two straight strikeouts from Karl Blum kept Paul from advancing any further. Isbel?said that the team stayed focused the whole game, going into its last three outs down by two, the team did what Pickler said they’d been doing the entire time: answer the call.rnrn”I felt like it was going to happen,” Isbel?said of winning the game. “It’s crazy. It’s everything you can imagine, it’s awesome.”rnrnIsbel attributed the win to “great guys being great dudes.” He said that the feeling in the dugout never wavered and that the team is never out of a game no matter the deficit.?rnrnRivas and the rest of the Y-D team thoroughly enjoyed the win. ?While he was reaching a childhood goal, the team celebrated the improbable victory they just stole. With just one out left to use in that ninth inning, Rivas came into a high-pressure situation and he delivered.rnrn”It was a good atmosphere: Everyone was positive and there were smiles on their faces,” Rivas said. “We sort of knew we would get to them at one point.”rnrn?rnrn?rn