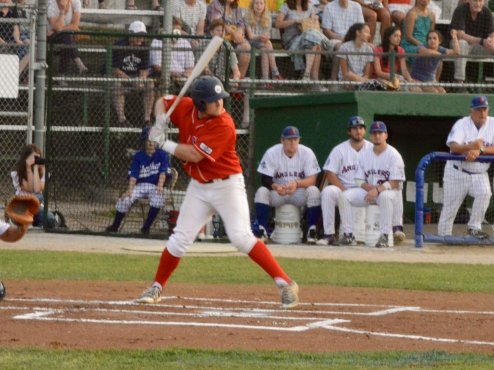 CHATHAM, Mass. ? The Yarmouth-Dennis Red Sox (23-17) dropped their fourth straight game on Saturday night, falling 6-2 to the Chatham Anglers (15-24-1). The Red Sox played like the team that had sat atop the division in the first three innings, scoring twice and keeping the Anglers off of the board. But, Chatham erupted for five runs in the middle innings and Y-D couldn?t battle back.

William Montgomerie (Connecticut, 2-2) worked the first five innings for the Red Sox, allowing five runs (three earned runs) while recording eight strikeouts. Montgomerie was perfect through three innings and didn?t allow the ball to leave the infield before the Chatham offense was able to push across two runs in the fourth.

The Red Sox recorded their first run of the game after a two-out walk by Will Toffey (Vanderbilt) in the second extended the inning, bringing Brendan Skidmore (Binghamton) to the plate. Skidmore launched a double over Stuart Fairchild (Wake Forest) to left field, scoring Toffey. Skidmore now has 21 RBI this summer, which is second-most on the team and tied for eighth most in the league.

Brent Diaz (Louisiana Tech) led off the third inning with a double off of the base of the right field wall. After a sacrifice bunt moved him to third base, JJ Muno (California Santa Barbara) drove him in with a hard ground ball out that Jeremy Vasquez (Florida) stopped with a quick dive toward the first base line, extending the Red Sox?s lead to 2-0.

The Chatham offense was not to be held back for long, however, as DJ Artis (Liberty) singled to left to start the bottom of the fourth inning. Mason Koppens (Northeastern) followed with a sacrifice bunt, but Montgomerie?s throw to second sailed into center field, allowing Koppens to reach and Artis to advance to third base. Hagen Owensby (East Tennessee State) and Fairchild both singled into center field, scoring Artis and Koppens and tying the game at 2-2.

Artis again started the offense in the bottom of the fifth, as he and John Aiello (Wake Forest) singled to lead off the frame for the Anglers. A throwing error on a bunt attempt by Koppens drove in Aiello and gave Chatham runners on second and third with no outs. Artis slid across the plate safely on a wild pitch later in the inning, and Vasquez grounded to second, scoring Koppens and pushing the Anglers? lead to 5-3.

The Red Sox offense threatened in the top of the sixth, but would be held scoreless for the rest of the night. Isaac Matteson (Pittsburgh) and Moises Ceja (California Los Angeles) combined for four shut-out innings of relief, recording four strikeouts in the process.

The Anglers added another insurance run in the seventh inning, after Kyle Adams (Richmond) drew a bases loaded walk to force in Koppens.

Despite a solid performance, Montgomerie was tagged with the loss for Y-D and Bo Burrup (Brigham Young, 1-0) earned the win in his first appearance for the Anglers.

The four-game losing streak is the Red Sox?s second-worst losing streak this season. They can?t finish worse than second place in the division because they have a nine-point lead over the Orleans Firebirds, who are in third place, with only four games left to play. They?ll likely need to win their remaining games and get some help from other teams in the league to overtake the Harwich Mariners for first place.

The Red Sox will be back in action at home on Sunday night, taking on the Wareham Gatemen with first pitch coming at 5 p.m.