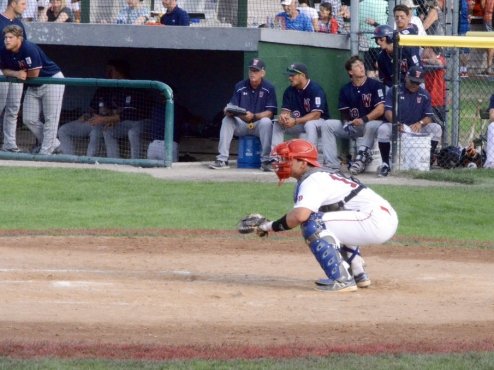 SOUTH YARMOUTH, Mass. ? The Yarmouth-Dennis Red Sox faced off against the Wareham Gatemen on Sunday at Red Wilson Field. Due to darkness, the ballgame ended at an even, 4-4.

Y-D picked up an early two-run lead by the end of the second inning.

Matt Winaker (Stanford) leadoff the game for the Red Sox with a walk, and would cross the plate on a Kevin Smith (Maryland) sacrifice fly.

Korby Batesole (Fresno State) drew a walk to get the bottom half of the second frame underway and was knocked in on a Winaker sacrifice fly to center field.

With one crack of the bat, Adrian Tovalin (Azusa Pacific) pulled Wareham within one after a solo blast in the top of the third. Y-D answered, tallying two runs of their own in the bottom half.? JJ Muno (UC Santa Barbara) started with a base knock and scored off of a Brent Diaz (Louisiana Tech) RBI double. Diaz went 4-for-4 in the game after being a defensive replacement earlier in the inning. The Red Sox recorded their second run of the frame, as Dillon Persinger (Cal State Fullerton) scored on a Will Toffey (Vanderbilt) sacrifice fly.?

The Gatemen noted two more runs in the fifth to level out the contest at four apiece.

Oliver Jaskie (Michigan) got the start for Y-D with two walks and five strikeouts in four innings of work.

Zachary Pop (Kentucky) was on the hill for the Gatemen lasting three frames, with three walks and whiffing three.

Due to the draw, the game was concluded with a no-decision between both clubs.

Y-D contends against Brewster on Monday at Stony Brook Field. First pitch is at 4 p.m.