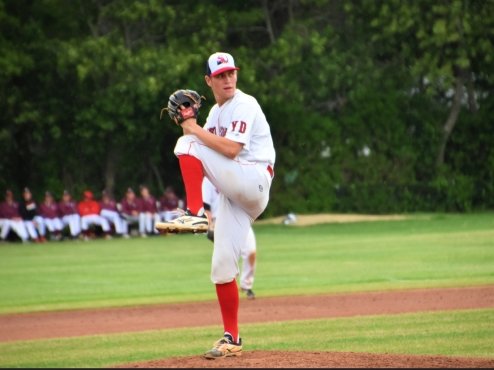 HARWICH ? The Yarmouth-Dennis Red Sox battled in their second pitcher?s duel of the week and once again came out on top. The Red Sox pitching staff is really starting to come along, while their offense is holding their own as well.

Jack Leftwich (Florida) had everything working for him in this one. He gave up one earned run, struck out six batters, and allowed three hits over 5.1 innings of work. The home run hit off of him in the second inning was the fifth hit and simultaneously, the fifth home run he had given up this summer. A pretty remarkable stat; all five of hits being solo shots. After Christian Fedko?s (UConn) home run, Leftwich really settled in. He was working fast and threw an abundance of strikes as he only walked two batters on the day, and eventually went on to be credited with the win.

Y-D?s bats struggled to get going for most of the game, but that all stopped once Noah Campbell (South Carolina) reached base with a one-out walk in the top of the sixth. Midway through Austin Wells? (Arizona) at bat, Campbell took off for second base and slid in safely. Although now in scoring position, it didn?t matter for Wells, who crushed a line drive home run over the fence in right field. It went 380+ feet and gave the Red Sox their first lead of the day, 2-1.

Taylor Dollard (Cal Poly) took over on the mound for Leftwich with one down in the home half of the sixth. He continued the dominating pitching performance, only giving up one hit over 2.2 innings of work. Dollard also sat down four of the nine batters he faced by striking them out.

R.J. Yeager (Mercer) got things going in the top of the 8th, as he made it to first base with a leadoff walk. He reached second after Campbell was hit by a pitch, setting Riley King (Georgia) up perfectly to give Y-D a key insurance run. He drove the ball to left field and the Sox took a 3-1 lead.

Zack Matthews (Oklahoma) entered the game to close things out in the ninth. He pitched a perfect 1-2-3 inning and struck out two of the three batters. Y-D went on to win their third straight game by a score of 3-1, and improved their record to 7-4-1 on the year.

The Red Sox will head to Fenway Park with the rest of the Cape Cod Baseball League tomorrow. On Friday, they will host the Falmouth Commodores at 5:00 P.M. at Red Wilson Field.