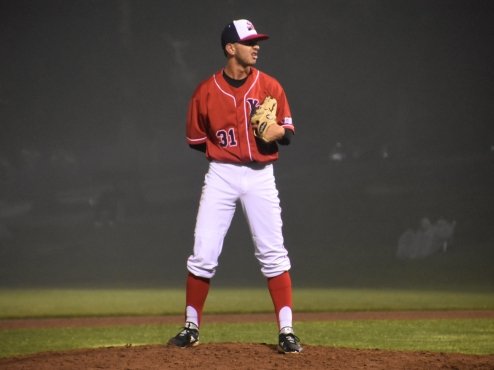 SOUTH YARMOUTH ? An abundance of rain has been the culprit of 29 delays and cancellations across the Cape Cod Baseball League so far this month, but it finally felt like a summer night at Red Wilson Field Friday as nearly 900 people attended the Yarmouth-Dennis Red Sox?s 4-3 win over the Falmouth Commodores ? their fourth straight. The sun shone for all nine innings, and a swarm of kids surrounded the Red Sox dugout after the game to take pictures with the players and collect autographs.

A little under three hours prior to first pitch, about half of the Y-D players huddled around the batting cage with giant grins on their faces, while the other half scattered across the outfield to shag balls ? as per usual. However, there were far more pulled heads and swings-and-misses than usual. It wasn?t that the Red Sox ? the team with the second-most hits and second-most runs among all 10 Cape League teams ? was struggling. Rather, the Y-D bullpen was simply partaking in a team tradition. Whenever the pitching staff throws a shutout ? which they did Monday night when Trent Denholm (UC Irvine) and John Beller (USC) threw a two-hitter against the Bourne Braves ? the bullpen gets to take a round of batting practice before the position players.

Boyd Vander Kooi (ASU) and Michael Weisberg (Cal State Fullerton) left the yard, but most of the other pitchers looked so ridiculous that even Red Sox Manager Scott Pickler had to laugh. This loose and relaxed attitude transferred into the game, as the pitching staff stayed composed in several high-pressure situations. Taylor Dollard (Cal Poly San Luis Obispo) came in during the eighth inning with one out and bases loaded, and struck out two batters in a row to end the Falmouth threat.?

This is what I work for,? Dollard said. ?You bust your butt all the time, every single day for situations like that. The intensity [and] the energy ? it?s just kind of what you work for. It was exciting to go in.?

Dollard, who got the save, struck out two more Commodores in the top of the ninth inning before catcher Austin Wells (Arizona) picked off Falmouth?s Zach Deloach (Texas A&M) at third base to end the ballgame.

?That was great,? Dollard said. ?[Wells] struck out the previous inning, clearly shook that off, [and] picked me up after hitting [Deloach] in the ninth inning. [I] couldn?t be happier about it.?

Wells has displayed exceptional athleticism for Y-D all month. He went 2-3 at the plate Friday with a run, an RBI, and two stolen bases. The Arizona phenom currently leads the league with four home runs and 12 RBIs, and has played several different positions for the Red Sox. He primarily catches and plays first base for the Wildcats but has played all three outfield positions for the Red Sox ? he?s even capable of playing shortstop, where he played in high school.

According to Wells, the uncertainty of where the team needs him to play on any given day doesn?t affect his mindset upon arrival at the ballpark.

“It honestly starts when I get up in the morning ? just staying focused and making sure that I?m ready to play the game,? Wells said. ?If it?s supposed to rain, then [that means] not letting myself get out of the zone, and just coming ready to hit. I just focus on being ready to hit at the plate because where I end up on defense doesn?t really matter to me.?

The Red Sox also got great performances out of newcomer Cullen Kafka (Oregon) and third baseman Riley Tirotta (Dayton). Kafka got his first win of the season in his first appearance, giving up just one hit and one unearned run in 2.1 innings. Tirotta went 2-3 at the plate with an RBI. Noah Campbell (South Carolina Columbia) set the tone in the bottom of the first inning, ripping a two-run home run off of the top of the center field fence ? his third of the season.

The 8-4-1 Red Sox will look to stay hot this evening as the 7-6-1 Brewster Whitecaps travel to Red Wilson Field for a 5 p.m. matchup.