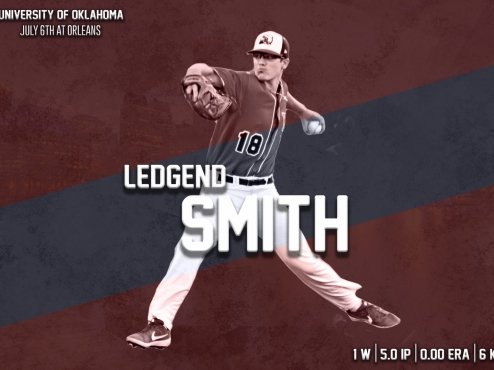 ORLEANS ? Aside from a few times last summer, Oklahoma reliever Ledgend Smith hadn?t started a game since high school. He made nine appearances for the Sooners as a rookie and 27 appearances this spring, but not a single one was a start. When he received the news yesterday morning that he was going to be that day?s starting pitcher in the Yarmouth-Dennis Red Sox?s matchup against the Orleans Firebirds, Smith was anything but anxious.

?I like starting more,? Smith said. ?I prefer to start.?

Through five innings, Smith didn?t issue a single walk and struck out six Orleans batters. According to Smith, his curveball was his best pitch all night. He gave up just two hits and no runs to guide the No. 2 Red Sox to a 4-0 victory against the No. 3 Firebirds ? their eighth straight win against them.

The rest of the Y-D pitching staff followed suit. Oscar Carvajal (Fresno State), who was added to the roster yesterday, gave up one hit and no runs in two innings of work. He made a defensive gem in the bottom of the fifth inning to keep Orleans off the board ? on a sac bunt attempt, Carvajal threw the runner out at second base, and shortstop Wyatt Young (Pepperdine) successfully turned the double play. Taylor Dollard (Cal Poly San Luis Obispo) continued to dominate, striking out four of the six batters he faced in the last two innings of the game. Dollard still has yet to issue a walk or give up a run, and has struck out 18 batters.

Riley King (Georgia) and Jake Palmer (UC Irvine) were the only two Red Sox to have a multi-hit game, but Young and Austin Wells (Arizona) each upped their hitting streaks to nine games and five games, respectively. Young still leads the Cape League in batting average at .379, while Wells leads the league in home runs at four and RBIs at 19.

It was clear during batting practice that the wind would work against hitters and prevent the ball from carrying, and the Y-D offense was quiet until the top of the eighth inning, when they capitalized on three Orleans errors. Palmer and Gavin Dugas (LSU), two players who are beginning to look comfortable at the plate, got things started with a single into center field and a walk. Young singled into right field to score Palmer, then took second on a wild throw home by the Orleans right fielder. The pitcher, who was backing up the throw, overthrew the ball into center field on an attempt to get Young out, allowing Dugas to make it a 2-0 game. A third error ? this time by the center fielder ? allowed Young to advance to third for Wells, who scorched an RBI double to the left field fence to give the Red Sox a third run.

Brad Beesley (Cal Poly San Luis Obispo) drew a walk and Tate Samuelson (Cal Poly San Luis Obispo) ripped a liner into the right-center gap in the top of the ninth inning. Both players stole on the next play, and another overthrow by an Orleans player allowed both runners to cross home plate. However, the third base umpire said Samuelson never touched third base and called him out.

The 13-7-1 Red Sox are now just two points behind the first-place Chatham Anglers in the East Division, and have a chance to close the gap today as they take on the Firebirds for the second time in as many days. First pitch is set for 5 p.m. at Red Wilson Field.

Heating up for the Red Sox: Palmer is earning himself an everyday spot in the outfield for the Red Sox. He went 1-1 and reached base in all five plate appearances against the Hyannis Harbor Hawks last Wednesday. He went 2-3 with a stolen base against Hyannis the next day. After a 2-4 performance last night, Palmer is now hitting .318.

Dugas missed over eight weeks of his rookie season at LSU due to a thumb injury and struggled in his first few games with the Red Sox. However, the second baseman is beginning to adjust. He drew three walks against Hyannis Thursday, and went 1-2 with a run, two walks, and a stolen base last night. Even when he isn?t making great contact, Dugas always plays hard and often makes things happen simply by hustling every ball out. Red Sox fans should expect the hits to come for Dugas.