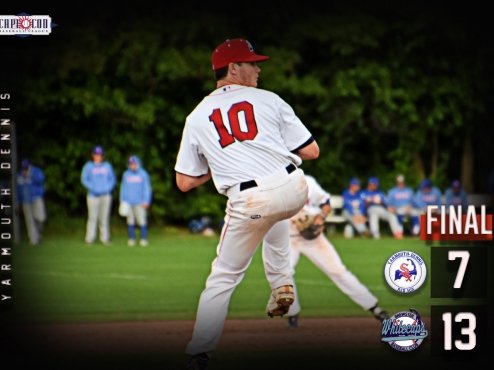 BREWSTER ? The Whitecaps defeated the Red Sox 13-7 are now leading the season series between the two, 2-1. Y-D has continued displaying their never say day attitude, as they trailed 6-0 at one point in this ball game, but ended up falling just short.

Connor Shamblin (Alabama) was on the mound for Brewster and began the game with three straight walks. Somehow he was able to get out of the inning unscathed, in fact, he didn?t allow a hit until there were two down in the third inning.

On the other hand, Erik Tolman (Arizona State) pitched a lot better than the book will tell you. To leadoff the home half of the first, Ryan Bliss (Auburn) reached with a single. He then advanced to second on a wild pitch and third on a passed ball, allowing Brett Auerbach (Alabama) to drive him in with a sacrifice fly. The run was unearned because due to the passed ball.

The bottom of the second was about as unlucky of an inning as Tolman could?ve imagined. Six of his first seven pitches were strikes, good for back to back strikeouts. That?s when it all went downhill. Following a two-out walk, Christian Molfetta (Stanford) crushed a two-run homer to extend the lead. Two more unearned runs crossed the plate, giving Brewster a 6-0 lead through two innings of play.

The Red Sox began to make a push in the top of the fifth when Austin Wells (Arizona) drove in Wyatt Young (Pepperdine) with a single. Noah Campbell (South Carolina) also came around to score thanks to a wild pitch.

The 6-2 deficit didn?t last long, as The Whitecaps were able to score twice in the home half of the fifth. Tolman left the game with two runners on base; Michael Weisberg (Cal St. Fullerton) came in to pitch in relief. A fielder?s choice and a base hit scored the two runs for the Whitecaps, and both were charged to Tolman. His final line was 8 runs (4 earned) on 7 hits, 7 strikeouts, and 3 walks over 4.1 innings.

With the game getting out of hand at 8-2, Y-D knew they needed to rally. With the bases loaded and no one out, R.J. Yeager (Mercer) grounded a ball back up the middle. It was mishandled, allowing Riley Tirotta (Dayton) to score. Young drove in a run as he grounded into a fielder?s choice, setting Campbell up for a big at bat. With two men on, he crushed a line drive home run over the fence in right field. The 3-run shot made the score 8-7, and suddenly the Red Sox found themselves right back in the game.

The Whitecaps then ran away with the game, starting in the following inning. They scored three runs in the seventh and then two more in the eighth, cruising to a 13-7 victory. With two outs, they were able to score a whopping 11 of their 13 runs.

The Red Sox will travel to Orleans to take on the Firebirds at 7:00 P.M. tomorrow.