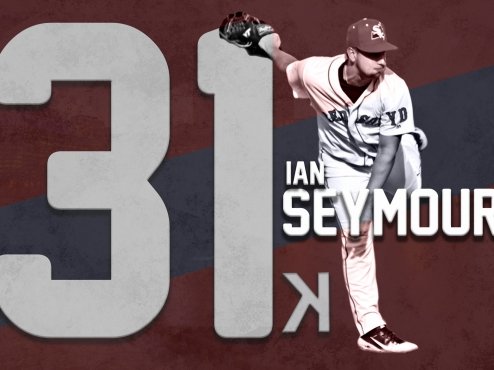 SOUTH YARMOUTH ? The Red Sox are now tied for first place in the East Division with their second win in a row against the Orleans Firebirds. They won 5-2 on Sunday night, in a ball game that was very similar to the one the night before. The game was called in the eighth due to darkness, right after the Red Sox had just rallied for 4 runs.

Ian Seymour (Virginia Tech) got the start for Y-D and had his best outing of the summer. The lefty threw five scoreless innings, while only allowing three hits and striking out nine batters. In 19.1 innings pitched, he now leads the entire Cape Cod Baseball League with 32 strikeouts. He?s averaging a whopping 1.68 strikeouts per inning, and has an earned run average of 3.26. More so than anything, it seems as if he always hits his spots and pinpoints exactly where he wants his pitches. In fact, Noah Cardenas (UCLA) barely ever had to even move his glove Sunday night.

Yarmouth-Dennis didn?t get going until the fourth inning when Riley King (Georgia) led off by smacking the first pitch he saw up the middle for a single. Jack-Thomas Wold (UNLV) then crushed a wall-ball double, putting both him and King in scoring position. Erik Tolman (Arizona State) got an opportunity to pinch hit and came up with a clutch single, giving the Red Sox a 1-0 lead.

Brandon Dufault (Northeastern) entered the game for the sixth and sat the Firebirds down 1-2-3. In the seventh, Zach Kokoska (Kansas State) drove in a run for Orleans off of Gordon Ingebritson (UC Irvine), but it was charged to Dufault. Zach Britton (Lousiville) hit an RBI double in the following inning and gave the Firebirds their first lead in two days. Despite allowing a run apiece, both Dufault and Ingebritson struck out two batters each.

Perhaps the biggest play of the night came with Tolman and Jake Palmer (UC Irvine) on base with one out in the eighth. The sun was quickly setting, so it was becoming evident that this would most likely be the last chance for the Red Sox before the game got called. Brad Beesley (Cal Poly) came in to pinch hit and drove in the game-tying run as Tolman scored on the single. Gavin Dugas (LSU) loaded the bases with a single of his own, giving Wyatt Young (Pepperdine) one last at bat to try to extend his 9-game hitting streak to double digits. It unfortunately came to an end, but more importantly, he hit a sacrifice fly which scored what would eventually be the game-winning run. Noah Campell (South Carolina) followed with what appeared to be a routine groundball, but an infield error allowed both Beesley and Dugas to score insurance runs, making the score 5-2.

The four run inning propelled Y-D to their second win in a row, and hopefully they will carry this momentum through their home stand.

After the game, Ian Seymour was asked about what it?s like to now be atop of the league in strikeouts. ?I guess it just means my stuff is where it needs to be to generate those swings and misses. I?m just going up there trying to get weak contact and it?s been working out.? He also alluded to how well his cutter was working for him throughout the game, while mixing in his fastball and strong changeup.

The Red Sox will once again play at Red Wilson Field at 5:00 P.M. on Monday against the Harwich Mariners.