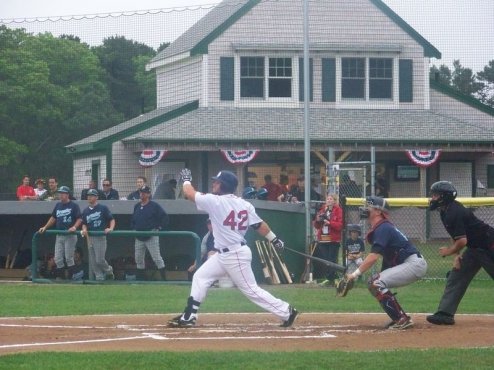 Two safety squeeze bunts by Andrew Daniel were the key in the Sox 4-3 win over the Brewster Whitecaps Saturday night. Daniel bunted home the tying run in the sixth, and the go-ahead run in the eighth. Daniel also extended his hitting streak to ten games as he went 2-4 on the night.

Daniel Savas started for YD and threw 4.2 innings of five hit ball, allowing three runs, all in the third inning. The bullpen was nails for the Sox as Jordan Minch and Darrell Hunter combined for 4.1 scoreless innings of relief, with Hunter shutting the door in the ninth to pick up the save.

The Whitecaps scored first in the top half of the third inning when Connor Schaeferbauer doubled home Trevor Mitsui. Scott Heineman gave the Whitecaps a three run lead with a two-run single in the same inning. That would turn out to be the only inning the ?Caps would score in.

The Sox would get a pair of their own in the bottom part of the fifth thanks to a T.J. White double and Taylor Smart followed up with an RBI single of his own. Down by one heading into the sixth, head skipper Scott Pickler called onto Andrew Daniel to carry out a safety squeeze in which Alex Blandino scored to tie the game at 3-3.

DJ Stewart led off the eighth with a double down the right field line; newcomer Eric Filia moved him over on a sacrifice bunt, and Andrew Daniel again laid down a perfect bunt to score Stewart, giving the Sox a 4-3 lead.r

Darrell Hunter slammed the door in the ninth with a 1-2-3 quick inning to bring the Sox record to 6-7-1 and moved into third place in the East Division. YD is back in action tomorrow night as they travel to Harwich to take on the Mariners. First pitch is set for 5:30pm.