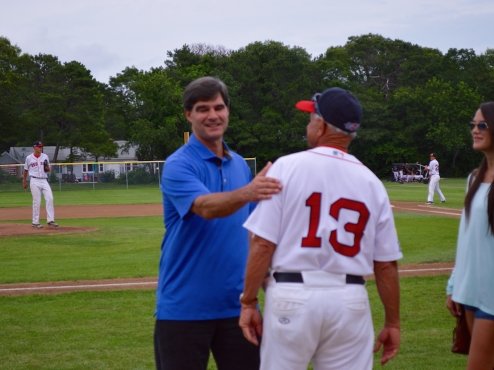 25 years ago, Brad Stuart stepped onto the mound for the Yarmouth-Dennis Red Sox?s 1990 championship team. On Wednesday night he took the ball once again to throw out the first pitch and deliver an inspiring message

Stuart, a graduate of University of New Orleans, pitched for both the 1989 and 1990 Red Sox teams, winning two Cape Cod Baseball League championships. He was drafted in the 30th round by the New York Yankees after his junior year of college and was drafted by the Texas Rangers in the 36th round the following year.

He went on to play one season in the minor leagues for two different teams. After brief stints with the Butte Copper Kings and the Reno Silver Sox, he put down his glove and entered the workforce.

?(My career) ended because of arm problems. When you?ve pitched at a high level and? are unable to pitch at that level again, you?re demoralized. It was time to shut it down. I had a really good degree and it was time to move on,? said Stuart.

Stuart, now 46, majored in mechanical engineering at the University of New Orleans and said that it was because of his father that he focused on academics while at school on scholarship.

?(I would give current players) the same advice my father gave me. Take school seriously because that is what is going to carry you beyond your baseball years. It is hard to see that far ahead but it is certainly critical to your future to do that. Make good decisions. The decisions (college baseball players) make now can impact them for the rest of their lives, good or bad.?

With Kyle, Stuart?s youngest child, going to Samford University to play baseball this fall, Brad Stuart will continue the advice that his father gave him to ensure that his son is making the most of his college education.

When asked what advice he has given his son about playing college baseball he said, ?First of all, keep the ball down. Secondly, make the most of the opportunity. He is a very smart kid and I want to give him the same advice my dad gave me. Take it all in, enjoy it, and don?t sell yourself short.?

Although Brad Stuart is no longer playing baseball, he still applies everything he learned during his collegiate and minor league career to what he does today. As a Senior Corporate Account Manager for Nalco Company, he takes everything he learned about working on and leading a team and uses it to succeed in the business world.

Stuart said, ?(The most important things I learned were) teamwork, how to lead others, and the work ethic that goes in to playing at this level. If you can work hard and do well at this level then you can overcome anything in the business world.?

Stuart?s message to his son and all collegiate baseball players is extremely important. Although he was forced out of the sport he loves due to injuries, he relied on his education to follow another path.

Although he never achieved his dream of playing Major League Baseball, he is successful and happy, both professionally and personally. He met his now-wife while playing for the Red Sox.

?(My wife) worked for the lady that housed me.? 25 great years of marriage later I have 4 beautiful, well-accomplished kids. She is a great mother.?

Stuart said that meeting his wife and playing with the best collegiate baseball players in the country made his summers with the Y-D Red Sox unforgettable.

The Yarmouth-Dennis Red Sox were happy to welcome back one of their own and hope that Brad Stuart, his family, and other former players will make the trip to Cape Cod to return to Red Wilson Field.

?It?s a special place that gave me a lot of great memories,? said Stuart.