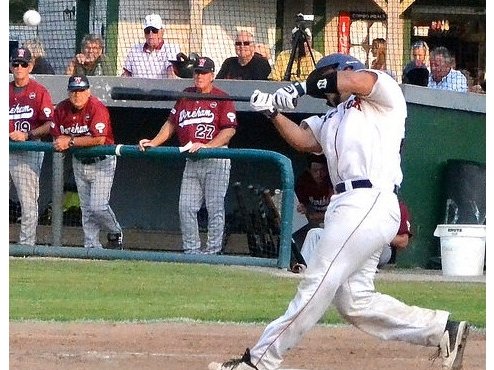 SOUTH YARMOUTH ? The Yarmouth-Dennis Red Sox appear to be rounding into championship form at the right time amidst their longest winning streak of the year. Winners of four straight and six of their last ten, Y-D is the second-hottest team in the league; trailing only the league-leading Orleans Firebirds in that stretch.

But who isn?t trailing the Firebirds?

While everyone is chasing Orleans (21-8 / 42 points), the Red Sox (15-14 / 30 points) have climbed to third in a heavy East Division earning 12 points in their last 10 games. They face-off against a Falmouth Commodores team (12-17 / 27 points) on Wednesday that they?ve dominated in three games this season.

That?s a far cry from nearly a month ago when manager Scott Pickler was in desperate need of a bat.

?We?re playing with a six-man lineup compared to everyone else,? Pickler said back on June 19th.

Let?s start with the table setters ? Billingsley and Edman.

The lead-off man Billingsley has boosted his .289 average (13th in CCBL) with an 11-game hitting streak ?currently tops in the league. He ranks second in the league in hits (33), tied for first with triples (2), tied for third in doubles (8). Perhaps the stat that stands out the most is his team-leading 15 RBIs ? a testament to the bottom half of the lineup?s production.

A leisure studies major, Billingsley?s key to the plate is simplicity.

?I try to keep things simple ? see the ball, hit the ball. I try to keep my head level, play hard and help my team win,? he said.

If Billingsley is the flint, Edman is the steel in sparking Y-D?s offense. His .337 batting average is third in the Cape League while his 29 hits is good for sixth. The Stanford infielder gets on base (.418 OBP / 4th in CCBL) and when he makes contact ? which is often ? he does so with authority (.430 slugging percentage / 6th in CCBL).

But want to hear the most impressive stat of the season?

Over his last seven games Edman is batting a robust .438.

In the three spot is shortstop Donnie Walton. His numbers have slide a bit after hitting well-over .500 the second week of the season, earning the Coca-Cola Player of the Week honor, but his average still remains in the top ten in the league with .311. With 13 RBIs overall and a .316 average and a .409 on-base percentage in the last seven games, hitting coach Roberto Mercado calls him the ?perfect number three hitter? who ?hits the ball hard?.

Perhaps the player who serves as the microcosm for this lineup?s turnaround is designated hitter Gio Brusa (Pacific). Struggling with a nagging elbow injury early on in the season going 3-for-23, Brusa seems fully healed heading into a hopeful playoff run. Through his last seven games he?s been a nightmare for opposing pitchers batting .350 with three home runs, nine RBIs.

He?s upped his average to .277 overall with an 11-game hitting-streak of his own. Brusa, an All-Star with Brewster last season, is tied for the league-lead in home runs with five, tied for fifth in RBIs (14), second among qualifying hitters with 13 at-bats per home runs and third in isolated power average with .246 (measuring a hitter?s average based on extra-base hits alone).

A third of the season still remains before the playoffs start. The Red Sox will need to separate themselves from the log-jammed East Division. Seven points is the difference between second and fifth place in the East while a mere two points separates Chatham (second place) from Y-D and Brewster, who are tied for third.

With help from their now-stacked lineup, the Red Sox should have little trouble getting back in the dance to defend their championship crown.