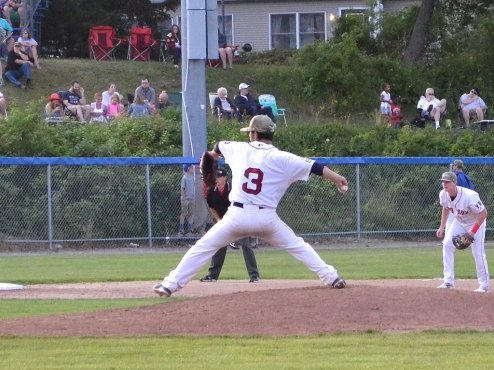 ORLEANS ? The Orleans Firebirds capitalized on a two-run home run from Ronnie Dawson in the bottom of the fifth as well as an outfield blunder to earn the Game 1 victory in the East Division Finals, 4-0, over the Yarmouth-Dennis Red Sox from Eldredge Field Thursday night.

The first game of the three-game series marked the sixth time the two teams met this season, with the Red Sox losing all three games at Eldredge Park ? and winning only one game in the season series.

That one game was a July 10th 5-0 shutout by Brandon Bailey, who took the mound Thursday for Game 1 hoping to duplicate the outcome.

Through the first three innings that was the case, where he recorded all four of his strikeouts.

Heading into the bottom of the fourth, however, Bailey ran into trouble. He walked right fielder Kyle Lewis, who scored on a double to deep left-center by shortstop Daniel Pinero. The next batter, second baseman Nick Zamarelli hit a high pop-up to center field. Fighting the lights, Cole Billingsley lost the ball and watched it drop just a few feet away from him, allowing the second run of the game.

That was all the run support Firebirds? starter Eder Erives needed in his first start of the season. He went 6.2 innings struck out four and allowed only one Y-D player to reach third.

Bryan Reynolds led off the bottom of the fifth inning with a single and a stolen base before Dawson pulled a letter-high fastball over the fence in right field to extend the Firebird lead to four.

Perhaps the lone bright spot for the Red Sox was the performance of the lengthy right-handed relief pitcher Evan Bell. After inheriting two base runners and 3-1 count from Mason Kukowski, who failed to record an out in the sixth, Bell struck out the side to get out of the jam and keep the deficit at four. He pitched three innings, striking out seven ? including six straight to start his outing.

Despite starting the game off with a lead-off single in the first three innings, the Red Sox line-up just couldn?t find the holes ? lining out five different times throughout the game. They also struggled on the basepaths with Billingsley and Michael Donadio getting thrown out at second.

Gio Brusa had easily the best day at the plate for the Red Sox going 3-for-3 with three singles and a walk.

First pitch for Game 2 of the East Division Finals from Red Wilson Field is at 4 p.m.