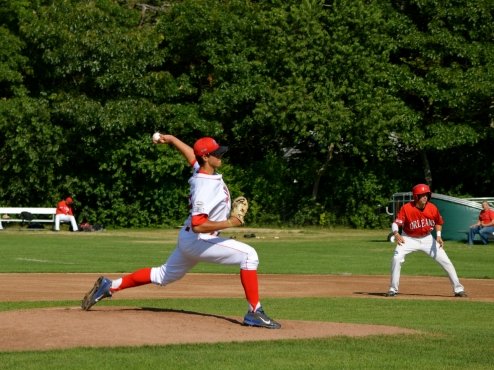 ORLEANS, Mass. ? Pitchers? duel. Matchup of the summer. Dominance on the mound.

The list goes on containing phrases describing the performances of starting pitchers Justin Jacome and Kolton Mahoney, as the Orleans Firebirds took game one of the Eastern Division Semifinals over the Yarmouth-Dennis Red Sox 3-0 Wednesday evening at Eldredge Park.

With the win, Orleans took a 1-0 lead in the best-of-three series.

Jacome (UC Santa Barbara) was solid in his seven-inning appearance for Y-D, allowing only two runs in the final frame of his appearance. Despite allowing eight hits, he struck out five and walked just two, throwing 92 pitches and retiring Orleans three times in order.

Mahoney (BYU) led the charge on the bump for the Firebirds, tossing seven innings of shutout ball in which he posted 13 K?s, a season high. He struck out the side twice, maintaining command with all of his pitches throughout his outing. Collectively between Mahoney, Bobby Poyner (Florida) and Reilly Hovis (North Carolina), Orleans? pitchers struck out 18 Y-D batters on the night.

The game remained scoreless into the bottom of the seventh inning when Jacome surrendered two to the home team. Garrett Black walked to begin the inning and moved to second base on a sac bunt by Bobby Dalbec. After a Johnny Sewald single, Cole Peragine walked to load the bases for Jerry McClanahan. On an 0-1 pitch, McClanahan (UC Irvine) smacked a single to left center, plating Black and Sewald to crack into the run column for Orleans and give the Firebirds a 2-0 lead.

The ?Birds tacked on an insurance run in the eighth to bring the game to its eventual final score. With David Fletcher at second and David Thompson at first, R.J. Ybarra (Arizona State) hit a grounder back to Billy Strode (Florida State), on in relief of Jacome. Strode tossed to second to put away Thompson on the fielder?s choice, but an errant throw by A.J. Simcox allowed Fletcher to score.

The Red Sox tallied five hits in the game, including two from leadoff hitter Andrew Stevenson (LSU) as well as a double from Jordan Tarsovich (Va. Military Institute). The double, which came in the top of the eighth, was the only extra-base hit of the game for either squad.

Y-D now faces elimination and hosts the ?Birds Thursday at 4 p.m. from Red Wilson Field in game two of the best-of-three series.