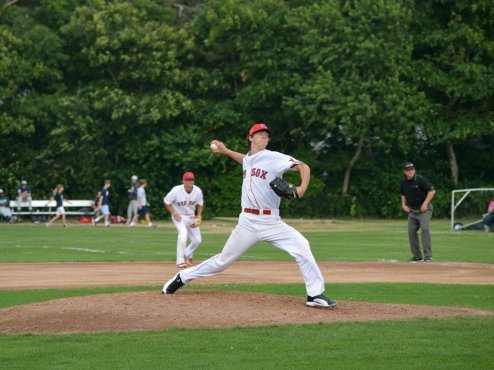 Walker Buehler stole the show for the Y-D Red Sox Friday night, as his team forced a game three in its playoff series against the Orleans Firebirds. Photo: Kyra McDonald/Y-D File

It was Y-D?s first playoff victory since August 16, 2012?a 5-1 win over the Wareham Gatemen in game two of that summer?s Cape Cod Baseball League Championship.

Buehler (Vanderbilt), who earned his first win of the playoffs and third of the summer, exited to a standing ovation from the Y-D crowd after fanning Cole Peragine (Stony Brook) to start the eighth inning. The righty retired the first eight batters he faced in the game, four by strikeout.

?You try and win every inning. The team played that way today, and we came out and were fortunate to get a win,? Buehler said after the game.

The Red Sox wasted no time in lighting up the scoreboard, plating three in the bottom of the first inning. Yarmouth-Dennis loaded the bases on an Andrew Stevenson single, followed by a walk to Michael Donadio and a bunt single from Jesse Jenner. T.J. Wharton then singled to right field, scoring Stevenson (LSU) and Donadio (St. John?s). Jenner (San Diego) scored after Jordan Tarsovich (Va. Military Institute) reached on a fielder?s choice.

Orleans tallied their only two hits of the evening in the third inning. After two quick outs, Jerry McClanahan (UC Irvine) and Geoff DeGroot (UMass Lowell) each hit singles, but both were stranded at second and first, respectively.

Y-D tacked on two more in the bottom part of the frame. With Wharton (Catawba College) at bat, Donadio and Jenner came in on consecutive wild pitches to make the score 5-0 in favor of the Red Sox. Firebirds starter Eric Hanhold (Florida) rebounded, however, striking out Derek Atkinson and Nico Giarratano to end the inning.

The home team continued to pad the lead, adding to the advantage in the fifth, sixth, and seventh innings. The sequence was highlighted in part by Donadio?s first Cape League home run, a solo shot to left center in the sixth.

?[The run support] makes you more comfortable. You can pitch with the lead and not be afraid to challenge guys. It definitely helps,? Buehler added.

Hanhold was replaced after 4.1 innings, as the Firebirds used three additional pitchers throughout the night.

Drake Owenby (Tennessee) relieved Buehler in the eighth; retiring each of the five batters he faced to finish the game.

The Red Sox and Firebirds face off Saturday evening at Eldredge Park to wrap up the teams? semifinal series. First pitch is set for 7 p.m., with the winner advancing to face the first-seeded Harwich Mariners in the Eastern Division Finals.