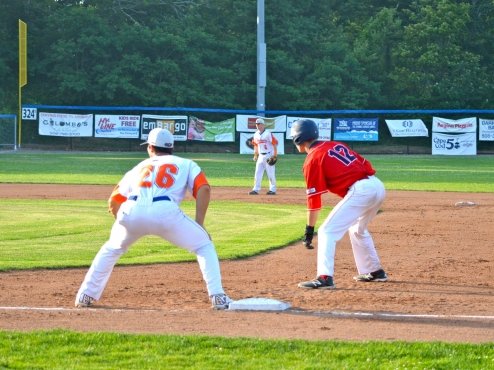 In the final regular season game of the summer, the Red Sox and Harbor Hawks faced off in a classic pitching duel.

Both starting pitchers for each team on the mound kept the game scoreless through the first four innings. Y-D?s newest addition to the rotation, Greg Ostner (Binghamton University) proved to be solid. Ostner gave up just three hits, allowed two earned runs, walked none and struck out four during his five innings of work. Taking the mound for Hyannis was Nick Bates (St. Louis University) who pitched 4.2 innings giving up two hits and one earned run.

The Red Sox were the first to break the scoreless tie in the fifth inning with back-to-back RBI doubles. During Brennon Lund?s (BYU) at bat, a wild pitch allowed Joey Armstrong (UNLV) to advance to second base. Then Lund blasted a double to right field, bringing in Armstrong to score. The next double would come from Marcus Mastrobuoini (Cal St Stanislau), bringing home Lund to give Y-D a 2-0 lead.

The Harbor Hawks didn?t take long to answer back as they scored two runs in the sixth inning. Daniel Kihle?s (Wichita State) ground out would allow Kyle Survance (Houston) to score Hyannis? first run. Billy Strode (FSU) would take over the pitching duties for Y-D and get out of the inning with only one more run, a sacrifice fly from Donnie Dewees Jr. (North Florida) to score Dyland Bosheers (Tennessee Tech).

With the game tied in the sixth inning, both teams would not only be fighting for the lead in the game but for their last regular season win.

Y-D would regain the lead in the eighth inning with one run and it proved to be enough for the eventual victory. With the bases loaded, Josh Lester (Missouri) advanced to first base with a hit by pitch. Andrew Stevenson (LSU) would score the Red Sox?s third run of the game.

Dimitri Kourtis (Mercer) would provide the relief for Y-D in the eighth and ninth innings. Kourtis pitched 1.2 innings only allowing one hit while striking out two.

With Orleans? win over Chatham also on Monday night, the Firebirds secured home field advantage for the Eastern Division semifinals and will host Y-D in game one (Best 2 out of 3) this Wednesday, August 6th. The game is scheduled to start at 7pm at Eldredge Park.

The Red Sox are the third seed in the East while Orleans is the second. Y-D lost to Orleans in the first three games of its season series but have come out on top in the past three matchups.