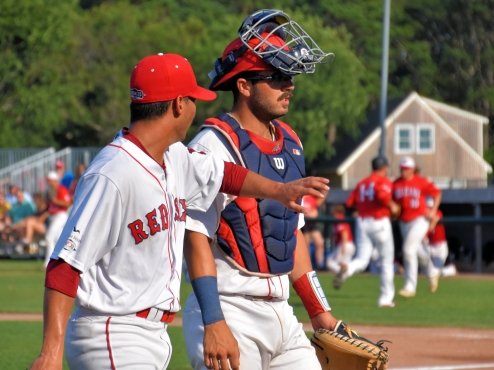 SOUTH YARMOUTH – Southpaw John Beller (Southern California) had a sensational start for the Yarmouth-Dennis Red Sox last night in game one of round two of the playoffs, but five different infielders committed an error to hand the Harwich Mariners a 5-1 win. The Red Sox will be challenged tonight as they face elimination against one of Harwich’s best arms – Jacob Palisch, who had a 0.77 ERA throughout the regular season – on their home field. Ryan Hare (UNLV) will get the start for the Sox.

Despite being credited with the loss, Beller was lights-out in front of a crowd of 3,300 yesterday – the biggest crowd Red Wilson Field has had all summer. Through the first three innings of the game, the lefty threw 28 strikes in 33 pitches. He struck out eight batters and gave up just three hits, two unearned runs, and two walks in six innings of work.

The Y-D bullpen looked solid as well. Jacob Winger (High Point) struck out one and gave up two hits, three runs (one earned), and one walk in 0.2 innings pitched. Division III All-American Nolan McCarthy (Occidental) came in with runners on the corners in the top of the seventh inning and did his job, walking one and striking out two in 1.1 innings of work. Gordon Ingebritson (UC Irvine) struck out two batters and gave up nothing in one inning pitched.

Despite outhitting the Mariners 11-5, the Red Sox left 14 runners on base. Tate Samuelson (Cal Poly) and Riley King (Georgia) continued to lead the way for Y-D while the team’s best hitter, Wyatt Young (Pepperdine), remains out of the lineup with a sore groin. Samuelson went 3-5 to bring his postseason average to .538, and King went 2-4 with a walk and is now hitting .583 through three playoff games. Carson Taylor (Virginia Tech) went 2-5 and Brad Beesley (Cal Poly) went 1-3 with a run and two walks. Austin Wells (Arizona), Noah Cardenas (UCLA), and R.J. Yeager (Mercer) are the other Red Sox to have recorded a hit.

The Red Sox scored their first and only run of the game in the first inning. Beesley drew a walk, Wells roped a line drive into right field, Samuelson poked a base hit into left field, and Noah Campbell (South Carolina) – who finished second in the batting title race last summer and fifth this summer – hit into a fielder’s choice to put the Sox up 1-0.

The Red Sox will look to force a game three and keep their hopes of winning the East Division Championship alive tonight as they take on the Mariners in game two of the series at Whitehouse Field. First pitch is set for 6:30 p.m.