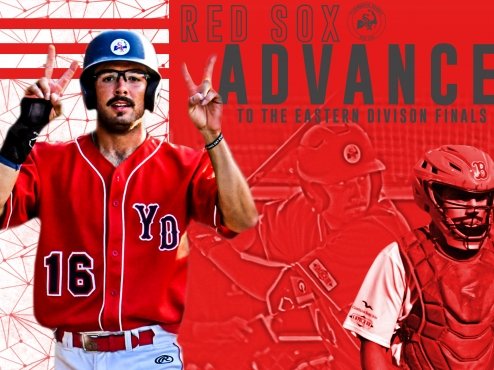 SOUTH YARMOUTH – In what was perhaps the most exciting game of the year, the Red Sox came away with an 11-7 victory over the Orleans Firebirds. Y-D has now advanced to the second round of the Eastern Division Playoffs where they will take on the Harwich Mariners.

After a wild ending on Friday night in Orleans, the Firebirds picked up just where they had left off. They rallied for 5 runs in the ninth inning of game one, and jumped off to a 4-0 lead through two innings in game two. Ledgend Smith (Oklahoma) was on the mound for the Sox, and it wasn’t as if he was pitching poorly, the Firebirds were really just finding the holes/gaps in the field.

The Red Sox didn’t lose their composure, they proved to be the resilient team that they had been all summer long. Smith breezed through the top of the third and the fourth, making it easier for Y-D’s offense to get themselves back in the game. Brad Beesley (Cal Poly) led the third inning off with a base hit. Riley King (Georgia) followed suit with a double, putting runners on second and third. Both Austin Wells (Arizona) and Tate Samuelson (Cal Poly) drove in runs to cut the Orleans lead in half at 4-2.

Andrew Eyster (South Carolina) led off the fourth with a walk, followed by a hit off the bat of Noah Cardenas (UCLA) which resulted in both of them getting into scoring position. Sam Hall (Clemson) and R.J. Yeager (Mercer) each drove in a run, and all of a sudden we had a tied ball game. The Sox weren’t done yet – Beesley reached base with a two out single. King continued swinging a hot bat with his second double of the night, this time it scored a run and gave his team a 5-4 lead.

Each team had now held a lead in this game, and that’s when things got quite interesting. Orleans scored two runs in the top of the fifth, regaining the lead at 6-5. That held until the Red Sox picked the bats back up in the home half of the inning, as Cardenas drove in Samuelson with a base hit. Eyster then crossed the plate on a passed ball, and the Red Sox were once again in the driver’s seat ahead 7-6.

Tanner Murray (UC Davis) crushed a solo home run in the sixth to tie the game back up; it was his second RBI of the night. Yet again, Y-D had an answer – Samuelson drove in the go-ahead run with a single up the middle.

With two outs in the seventh, Beesley crushed a two-run double to give Y-D a couple of key insurance runs. He would go on to score on an error which was hit off of the bat of Wells, and the Red Sox were only six defensive outs from winning their first round with an 11-7 lead.

Jack Jett (Hofstra) took over on the mound in the top of the fifth and would go on to finish the game. He did give up a run in the sixth, but other than that he gave the Red Sox about as much as they could have asked for. He gave up one run on five hits, struck out two, and didn’t walk a batter over five innings of work. Jett threw a 1-2-3 eighth, followed by a strong ninth in which Riley King made a crisp throw to Samuelson at first to seal the deal.