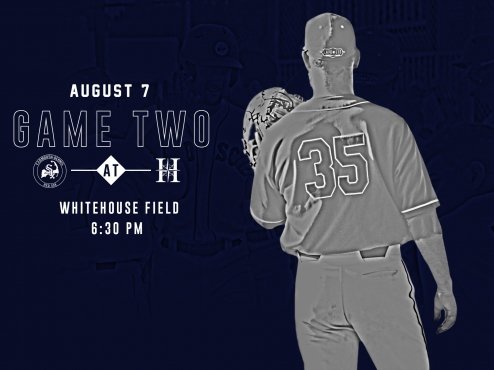 HARWICH – The Red Sox lost to the Mariners in game two of the Eastern Division Championship series by a score of 5-1. Y-D is now eliminated from the postseason, but the team certainly shouldn’t hang their heads as their 22-19-3 season had a bunch of success.

On paper, going into game two, things didn’t look too good for the Red Sox. Jacob Palisch (Stanford) entered the game with a regular season record of 5-1 with 35 innings pitched, 38 strikeouts, and an E.R.A. of 0.77. Combatting that would be tough, but Ryan Hare (UNLV) was more than up for the challenge.

Through the first two innings, Hare struck out two batters and only allowed one hit. In the top of the third, Andrew Eyster led off with an infield single. With two outs, slugger Austin Wells (Arizona) laid down a perfect bunt for a base hit. Coach Scott Pickler had told Wells prior to the game to drag a bunt down the third base line at some point, and Wells did just that. That put runners on first and second for Tate Samuelson (Cal Poly), who came through with an RBI single to give the Red Sox a 1-0 lead.

With two outs in the fourth, Hare gave up his second hit of the day to Cory Acton (Florida), and unfortunately it was a solo shot that tied the game 1-1. Those two hits to Acton were the only two that Hare surrendered in his outing. He went 6 full innings, struck out 7, and gave up 1 run. Palisch did the same but only struck out 6 batters. Essentially, Ryan Hare went toe-to-toe with arguably the best pitcher in the Cape Cod Baseball League this summer.

The Red Sox brought Carlos Lomeli (St. Mary’s) into the game to start the seventh. After Acton got on with a walk, Joey Wiemer Jr. (Cincinnati) crushed a double and put runners on second and third. Patrick Winkel (UCONN) drove in Acton with a sacrifice fly, giving the Mariners a 2-1 advantage. Oscar Carvajal (Fresno State) came in to pitch and got Michael Ludwig (Wake Forest) to hit a ground ball to third; exactly what Carvajal had wanted – except it was hit so softly that it was good for an RBI single. In stepped Hal Hughes (LSU) with two outs, and he put the game away with a two-run blast. Right then and there it seemed all of the life/energy was sucked out of the Red Sox, who now trailed 5-1.

Nick Stewart (James Madison) was on the mound for the Mariners to begin the seventh and he was dialed in. He shut down the Red Sox batters, as he threw a perfect three innings to end the game – nine up and nine down with four strikeouts.

It was a terrific summer for Y-D and the team definitely left it all out on the field. Coming up short is always tough, but the Red Sox made it to the second round and lost in a tough matchup. The Harwich Mariners will now take on the Cotuit Kettleers in the CCBL Championship.