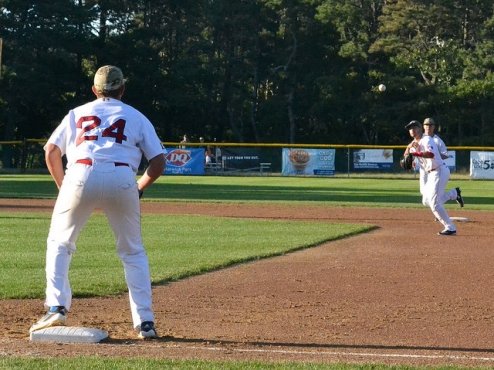 As rain muddied infields around the Cape League, cancelling three of the five games on tap for the day, pitching reigned early on. Between Thomas (Fresno State) and Anglers starter Parker Dunshee, the two allowed only three hits on through five-and-a-half frames before the Red Sox lineup hit their stride at the plate.

Trailing 1-0 in the bottom of the sixth with third baseman Connor Wong (Houston) on first, Noda took a 3-2 pitch from Dunshee and launched it deep over the right field fence for his first home run of the year, putting the Red Sox (8-9) ahead 2-1.

In the bottom of the seventh, the Sox sent eight batters to the plate and scored three more runs. The rally started with an infield single by Stephen Wrenn (Georgia), who would go on to steal second and, then third on a double steal with Wong, who walked to reach base. Following a five-pitch walk by Noda, pinch hitter Brady Conlan (Cal St. Dominguez Hills) hit an RBI single with the bases loaded. Billingsley (3-for-4) then roped a 2-RBI bases-loaded single extending the lead to 6-1.

That was more than enough for Thomas, who?s sporting a miniscule 1.07 ERA through three starts on the season. After a rocky start for the righty, Thomas settled down retiring 11 of the last 12 batters he faced. It?s his second start with at least seven strikeouts for the 6-foot-1 sophomore.

Right-hander Gabe Cramer (Stanford) worked a perfect seventh inning while Alec Eisenberg (Hofstra) pitched the final two innings in relief. He gave up a meaningless home run to Anglers? right fielder Luke Persico in the bottom of the eighth but struck out the next two batters to thwart any late-inning rally.

This is Eisenberg?s first appearance as a full-time player. He signed a full-time contract on Wednesday following a three-inning save in which he struck out six of nine batters faced.

The lone Anglers run came in the top of the first inning on an RBI double by second baseman Corey Raley that scored lead-off man Aaron Knapp, who was hit in the back of the helmet on an errant Thomas breaking ball.

Red Sox soon-to-be third baseman Will Toffey was in attendance for the victory, but will in all likelihood not suit up until Wednesday?s game home game against Chatham. Toffey, a native of Barnstable, just finished playing in the College World Series for Vanderbilt, who lost to University of Virginia in the best-of-three series.

The Red Sox will look to reach .500 tomorrow as they hit the road to face the Cotuit Kettleers (5-12). First pitch from Lowell Park is at 5 pm EST.