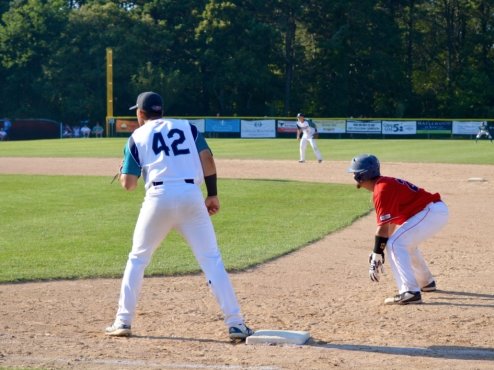 Ben Bowden (Vanderbilt) continued to impress with 4.2 scoreless innings of work in the Yarmouth-Dennis Red Sox?s 3-2 victory over the Brewster Whitecaps in game one of a best-of-three series.

The Red Sox and Whitecaps, the East Division third and second seeds respectively, played the first game of the playoffs at Stonybrook Field on Monday.

The Red Sox scored all three runs in the eighth inning and played defense the rest of the day. Cory Malcom (Arkansas Little Rock) made his first start of the season on the mound for the Sox. He went two innings, allowed two hits, and gave up one run.

Brent Rooker (Mississippi State) homered in just his third appearance for Brewster for the Whitecaps? only run against Malcom. The Whitecaps held their 1-0 lead from the second inning all the way to the eighth.

Bowden came in after Malcom and pitched lights out yet again. Through his eleven appearances and 22 innings this summer, Bowden has given up nine hits, struck out 35 batters, and allowed no runs.

Teammate and shortstop Donnie Walton (Oklahoma State) said, ?We?ve got a lot of good pitchers but, with Ben out there, I feel so comfortable and I?m relaxed out in defense because I know he can get the job done.?

Despite the season-long pitching struggle that the Red Sox have endured, they have relied on relief pitchers like Bowden in recent games. The depth of their bullpen has kept the Sox in tough, low-scoring games.

Y-D has another reliable relief pitcher in Chad Hockin (Cal. St. Fullerton). He earned the win today and pitched 2.1 innings. Hockin allowed one run and struck out three batters, two of which came in the bottom of the ninth inning.

The Red Sox offense couldn?t take advantage of big situations early in the game. They stranded 10 runners, including three in the first inning when they left the bases loaded. There were a few highlights in the Y-D lineup, namely newcomer Tyler Houston (Butler).

Houston, who arrived to the Cape on Saturday, started in right field and went 3-for-4 with a walk. Houston led off in the big eighth inning, singled, and scored the first run for the Red Sox.

Y-D broadcasters Anthony Santaniello, Mark Boyle, and Ryan Gallant spoke with Houston after his big game. Houston said, ?It?s a great time to get out here. I?m just trying to do whatever I can to win. Whether it was executing by laying down a bunt or hitting a sacrifice fly like (Michael) Donadio had, everything was big that inning.?

Walton drove Houston in for his team-leading 23rd RBI of the summer. Brusa also leads the Sox with 23 RBIs. Walton said, ?We?ve got a lot of good guys in the lineup that make good swings and I know (they) will back me up when I reach first. It was a good team win.?

The Yarmouth-Dennis Red Sox hope to close out the first series of the playoffs tomorrow at 4 p.m. at Red Wilson Field.