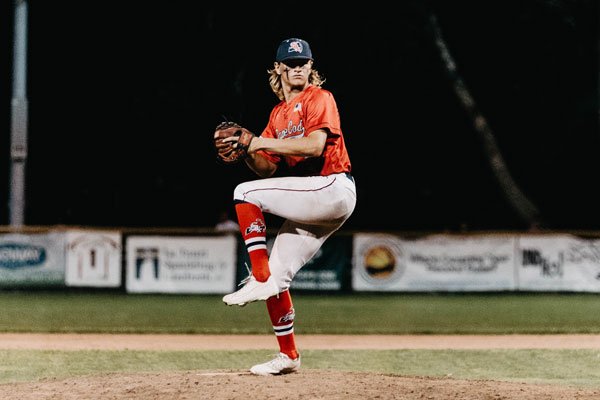 With the Yarmouth-Dennis Red Sox needing to squash a late Orleans rally Friday night at Eldredge Park, Field Manager Scott Pickler didn’t turn to the bullpen. Instead, he called to the outfield to bring his centerfielder Cole Carrigg in to pitch.

Carrigg delivered, firing an electric, five-out save with four strikeouts to seal Y-D’s 8-4 win over the Orleans Firebirds in Game 2 of the First Round of the Cape Cod Baseball League Playoffs, completing a two-game sweep. Jonny Long drove in two in the first inning with a single, and Ivran Romero controlled traffic on the mound for 5.2 innings on his mom’s birthday in the win.

“That kid’s full of tricks,” Romero said of Carrigg. “You never know what he’s gonna do. He’s a great player and we’re very lucky to have him on our team.”

The Red Sox will face the Brewster Whitecaps in the Eastern Division Finals, with the first game set for Sunday at Stony Brook Field. First pitch will be at 4 p.m.

The victory capped a wild day for the Red Sox, who finished off a 12-11 win over the Firebirds in a continuation of Game 1 earlier in the day, after the game was suspended due to darkness. After not winning a game in 14 days, the Red Sox pulled off two wins in a single day.

“We haven’t won in a while and getting two in one day, it’s a pleasure and a blessing,” Romero said.

In the first, Woody Hadeen singled, stole second, and advanced to third on an error. He later scored when Braden Montgomery reached on a different error. All-in-all, the Firebirds made six errors in the game, a season-high for any team in the Cape League.

After Hayden Schott singled and Homer Bush Jr reached on an error, Long drove a two-run single through the shortstop Nic McClaughry to make it a three-run lead. Long’s single gave him six RBI in the two-game series after his grand slam in Game 1.

“They jumped on them early, which we needed to do” Y-D Field Manager Scott Pickler said. “I thought it was exciting.”

The Red Sox added two more in the second, as Hayden Schott hit a run-scoring error and Mike Boeve followed him with an RBI infield single.

On the mound, Ivran Romero settled into a groove. He allowed a run in the third inning on a groundout, but nothing else over his 5.2 innings of work.

“Happy birthday Mom, I love you and this one was for you,” Romero said.

And for a Y-D staff that used five pitchers in Game 1, Romero’s longevity was a massive boost.

“He survived for almost six innings,” Pickler said of Romero. “I got to save part of my bullpen.”

The Red Sox added another run on a fielder’s choice in the fourth, and two more in the fifth on a throwing error. The seven-run lead was Y-D’s biggest since their July 22 win over Wareham, Y-D’s last regular-season win.

It even gave enough of a cushion so that Carrigg came in from the outfield to not only get the Red Sox out of the eighth inning, but for him to slam the door with three straight strikeouts in the ninth.

Carrigg’s pitching, after recording two hits earlier in the game, generated more electricity at Eldredge Park than a steam turbine. Carrigg worked quickly, showing off his arsenal — including his split-changeup, which he used for the final strike against Nik McClaughry.

It allowed the Red Sox to avoid using fellow two-way player Braden Montgomery in the ninth, as the newly-minted closer threw 15 pitches while finishing off Game 1 earlier in the day.

Carrigg said Pickler told him two things before he entered: “throw strikes, and don’t let Braden come into the game”. Carrigg did both those things in an incredible performance.

The offense is clicking for Y-D at the right time. They’ll hope to keep it clicking against Brewster in the Eastern Division Finals.