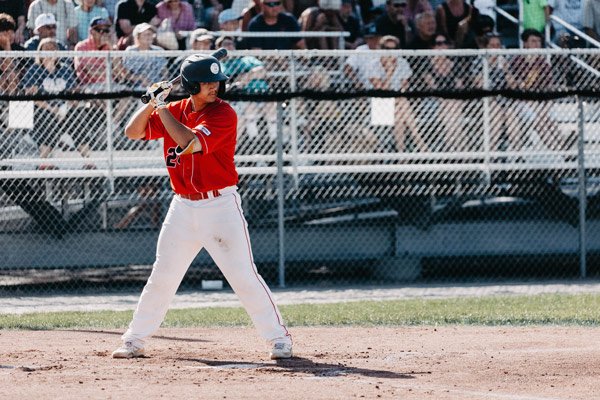 The Y-D Red Sox lost the first game of the Eastern Division Finals 6-3 to the Brewster Whitecaps on Sunday at Stony Brook Field.

The loss puts the Red Sox on the brink of elimination. They’ll need to win tomorrow at Red Wilson Field to force a winner-take-all game three back in Brewster on Tuesday.

Throughout the regular season, these were the top two teams in the East division. Although Y-D led the division for most of the year, a Brewster surge and a Y-D slump gave Brewster the division title and the top seed in the Eastern playoffs. With both teams finishing at 19-17-8, it seemed to be an even matchup on paper.

It began that way, as both teams traded early blows throughout the first four innings.

After Y-D threatened in the top of the first, it was Brewster who drew first blood in the bottom of the first. Dylan Goldstein drilled a solo home run to right field to open the scoring. Y-D responded with a run in each of the next two innings to take a lead.

Woody Hadeen tripled to lead off the third, and Braden Montgomery drove him home immediately with a sacrifice fly to put Y-D ahead 2-1.

Carson Demartini hit the first of his two two-run home runs to give Brewster the lead right back in the bottom of the third, and Jonny Long launched a ball into the woods behind left-field to even the score at three.

After the fourth, the Y-D bats went quiet. Brewster pitchers Carson Liggett and Jack Stroud allowed just the one run over the final six innings to hold the Sox offense at bay.

Stroud was especially impressive, facing the minimum across the final three innings of work. Y-D didn’t record a hit over the final four frames.

Demartini hit his second two-run home run to give the Caps a 5-3 lead, and David Mendham added a solo shot to extend the lead to three, where the score held until the final out.

“You have to give them credit,” Y-D Field Manager Scott Pickler said. “He threw some sliders that weren’t good pitches and they took advantage of them. We got beat by the long ball today.”

Game two of this three-game series is tomorrow at 3 p.m. at Red Wilson Field. With a win, Brewster would advance to the Cape League Championship Series for the second straight year.

For the Red Sox, the goal is clear: Do everything you can tomorrow to get back to Brewster on Tuesday.

“Play every inning and get back here to compete,” Pickler said. “How much fun would it be to compete in a one-and-done?”