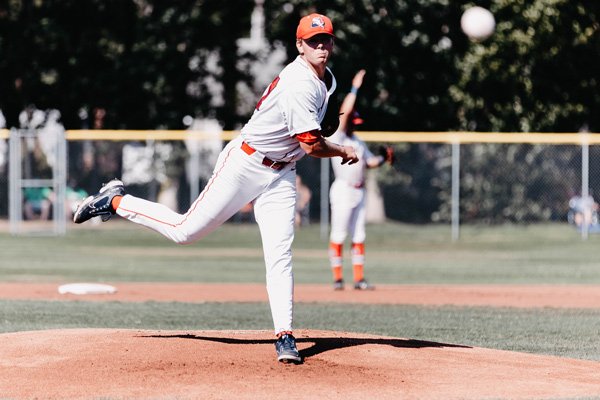 The probable pitching matchup is Ivran Romero vs Ben Shields.

The Y-D Red Sox and Orleans Firebirds series opener was suspended after eight innings on Thursday due to darkness. With Y-D leading 12-11, play will resume at the start of the 9th inning at noon at Red Wilson tomorrow before the two teams head to Orleans for Game 2.

Y-D overcame deficits of 6-0 and 10-3 to take a 12-10 lead before allowing one more to set up an exciting finish tomorrow.

It’s hard to pinpoint an appropriate adjective to describe what happened at Red Wilson Field in Game 1. Words like insane and berserk feel like criminal understatements.

“It’s fun to watch these guys compete,” Y-D Field Manager Scott Pickler said after the game. “It’s contagious when guys pick each other up – when they start feeling it.”

Orleans jumped all over Bryce Robison, who Pickler had been saving to begin the playoffs.

Robison lasted just one inning, giving up five hits and six earned runs, and the Red Sox were down 6-0 before they even stepped into the batter’s box.

Y-D started chipping away immediately, with Hayden Schott and Homer Bush Jr. each recording RBI singles in the bottom of the first. Both teams added a run over the next two innings, but Orleans made it 10-3 with three more runs in the top of the fourth.

Having not won since July 22 and facing a seven-run deficit, it would have been easy to write off Y-D and look ahead to tomorrow. Instead, Jonny Long sparked a chain reaction that vaulted the Red Sox to a 12-10 lead, three outs away from a Game 1 win.

Orleans Field Manager Kelly Nicholson brought in Collin Kramer to face Long in the fifth with the bases loaded and one out. Long is exactly who the Red Sox wanted up with traffic on the basepaths, as he led the team in the regular season with five home runs.

After Kramer missed with his first offering, Long’s eyes lit up as his second offering was one he could put a solid swing on.

“He threw one right down the middle,” Long said. “So I said, alright, let me just throw this over the right field fence.”

Long launched a 366-foot grand slam the other way, igniting the Y-D dugout and the fans at Red Wilson. The slam made it 10-7, and Y-D was right back into the game.

Fernando Gonzalez singled in Caden Connor later in the inning to get it within two, and the Sox looked destined to take the lead when they loaded the bases again with one out. Instead, Braden Montgomery and Schott both grounded out to end the frame.

The rally continued in the bottom of the sixth. Cole Carrigg tied the game with a two-run single, and Woody Hadeen gave Y-D the lead with a two-run double down the right-field line.

While the Y-D bats were lighting up the Orleans bullpen, Grant Taylor had provided stability on the Red Sox end, going 3.1 innings, giving up just one earned run and striking out seven.

Pickler had mentioned in the games leading into tonight that bringing in a potential starter out of the pen was a possibility, and it was one met with skepticism by some. Pickler stuck to his guns and doubled down on the decision after the game.

“There is no tomorrow. I did what I thought was right,” he said. “Keep us in the game and give us a chance.”

Orleans made it 12-11 in the seventh, but Luke Jewett stranded the bases loaded to preserve the Y-D lead.

The final inning and a half of the night went quietly, but there was one more bubble that burst right as home plate umpire Timothy Carey signaled to suspend the game.

After Carrigg struck out to end the eighth, he and Orleans reliever Josh Allen exchanged words and approached each other in front of the plate. They were quickly separated, even as the benches and bullpens cleared.

As players were heading back to their respective dugouts, some shoving occurred between assistant coaches, prompting both teams to begin to converge. Cooler heads prevailed, ultimately, but the dispute was a fitting ending to a game that isn’t even final.

The 9th inning, and any potential extra innings, will be played at 12 p.m. tomorrow at Red Wilson. Game 2 is still set for 6:30 p.m. at Eldredge Park.