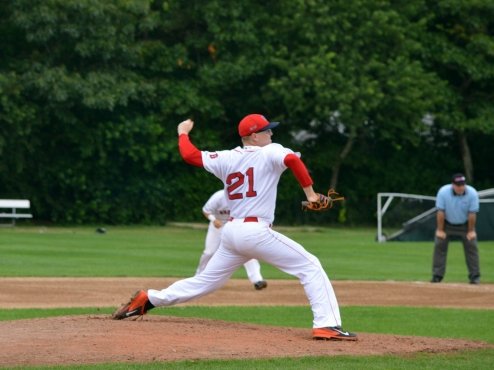 Kevin Duchene struck out 12 of 26 batters that he faced as the Y-D Red Sox escaped with a 1-0, series-clinching win at Orleans Saturday night. Photo: Kyra McDonald / Y-D File

ORLEANS, Mass. ? Kevin Duchene continued the Yarmouth-Dennis Red Sox trend that is dominant pitching and the member of the Illinois Fighting Illini struck out 12 en route to a 1-0 win as Y-D defeated the Orleans Firebirds Saturday night at Eldredge Park.

The Red Sox advanced to the Eastern Division Finals for the second time in three seasons and will face the Harwich Mariners in the second round.

Duchene maintained command with all of his pitches throughout the evening, showcasing a stellar curveball. He went 7.1 innings, allowing only one hit which came off the bat of David Thompson (Miami) in the first inning.

His only challenge came two frames later, when the Firebirds sent six batters to the plate and loaded the bases. Dathan Prewett began the inning with a walk and advanced to second after Jerry McClanahan was hit by a pitch. After Geoff DeGroot laid down a sacrifice bunt and David Fletcher grounded out, Thompson drew a walk. Duchene rebounded, however, striking out Bobby Dalbec to end the threat.

Perhaps most overshadowed in the game was the second inning, during which the Red Sox plated what proved to be the series-winning run. After Jordan Tarsovich (Va. Military Institute) reached on a fielder?s choice, Joey Armstrong (UNLV) singled to the gap in right center field to move Tarsovich to third base. Josh Lester (Missouri) then stepped up to the plate.

On the first pitch, Lester dropped down a perfectly executed squeeze bunt, moving Armstrong to second and scoring Tarsovich to give the Red Sox the lead.

Kyle Twomey (Southern Cal) received the loss for Orleans in his third start of the summer. The southpaw struck out one, allowed five hits, and did not walk a single Y-D batter in five full innings. Hayden Stone (Vanderbilt), Bobby Poyner (Florida), and Reilly Hovis (North Carolina) made relief appearances for the Firebirds.

Armstrong continued to showcase his defensive ability in Orleans, taking away extra bases from Johnny Sewald (Arizona State) in the seventh inning. On the first pitch, Sewald drove a high fly ball to right field that some thought may leave the ballpark. But the UNLV Rebel made the grab on the run to secure the final out of the inning.

Phil Bickford (Cal State Fullerton) made his Cape League playoff debut, striking out two over 1.2 innings of work in relief to earn the save.

The Firebirds put a scare into Bickford and the Red Sox in their last chance at bat. Dalbec, carrying the tying run, reached on an infield single with two outs to bring up R.J. Ybarra (Arizona State). Ybarra, who batted .462 against the Red Sox in the regular season, was dealt a high fastball on 0-2 by Bickford and chased to end the game and series.