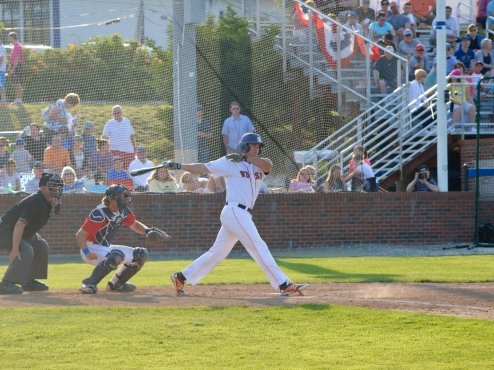 CHATHAM, Mass. ? Gio Brusa clubbed his third and fourth home runs of the summer and the Yarmouth-Dennis Red Sox improved to 13-14-0, defeating the Chatham Anglers (15-12-0) by a score of 8-1 at Veterans Field Saturday.

As has been the case in recent times, the Red Sox bats came alive early in the ballgame. Cole Billingsley (South Alabama) led off the game with a single, ultimately scoring on a Brusa (Pacific) single to give Y-D a 1-0 lead. Will Toffey (Vanderbilt) later grounded into a fielder?s choice that eliminated Brusa, but scored Donnie Walton (Oklahoma State).

Brusa stepped to the dish again in the top of the third, sending the first pitch he saw over the fence in straight-away center field for a three-run homer to give his team a 5-0 lead. After Stephen Wrenn (Georgia) knocked in a run in the fourth, Brusa hit his fourth home run of the season in the fifth inning to lead off the frame.

Chatham tallied its lone run in the bottom of the sixth, when Aaron Knapp (California) singled to plate Will Craig (Wake Forest).

The Red Sox return to Red Wilson Field in South Yarmouth on Sunday, hosting the Wareham Gatemen. First pitch is scheduled for 5 p.m.