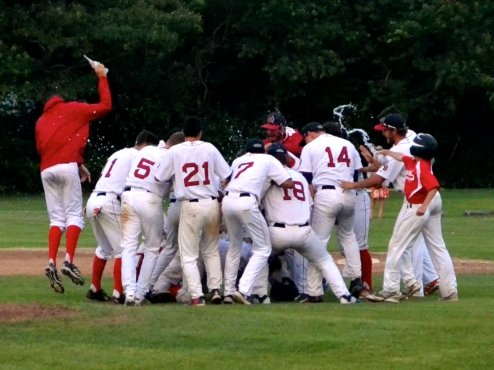 SOUTH YARMOUTH, Mass. ? A pinch hit home run by Connor Wong tied the score in the bottom of the ninth inning and the Yarmouth-Dennis Red Sox came away with a 10-inning win over the Wareham Gatemen, 3-2, at Red Wilson Field Sunday night.

Despite dominating the hit column, Y-D was kept off the board until the bottom of the seventh. Nathan Rodriguez (Arkansas) singled to begin the inning, then advanced to third on an errant pickoff attempt by the catcher. He ultimately scored on a base hit by Billingsley. That was all for the Red Sox in that frame, but it marked the beginning of the rally.

With one out in the bottom of the ninth, Wong (Houston) stepped to the plate to pinch hit for Rodriguez. The rising sophomore hammered a 2-0 offering over the fence in straight away centerfield for his first home run of the summer, tying the game at two apiece.

Moving to extra innings, the Gatemen were retired in order by Cory Malcom (Arkansas Little Rock), setting the stage for the Y-D in the bottom of the tenth. Edman popped out to shortstop to begin the inning, but was followed by a single from Donnie Walton (Oklahoma State) and a Gio Brusa (Pacific) double, which advanced Walton to third. Stephen Wrenn (Georgia) then drew an intentional walk to load the bases. After Will Toffey (Vanderbilt) struck out, Michael Donadio (St. John?s) sent an 0-1 pitch to center field for a single that scored Walton to give the Red Sox a 3-2 win.

Yarmouth-Dennis used four pitchers on the night, each of whom allowed no more than three hits each. Evan Bell (Indiana) made his first start of the summer, then was relieved by Alec Eisenberg (Hofstra) midway through the fourth. Ben Bowden (Vanderbilt) and Malcom stole the show on the mound, combining for nine strikeouts and not allowing a run.

Malcom (2-0) earned the win in relief, while Wareham?s Ryan Olson (Cal Poly Pomona) ended up on the losing end (0-2), also being charged with a blown save.

Next on the docket for Y-D is a Tuesday contest at Harwich?s Whitehouse Field, as the Red Sox face the Mariners at 6:30 p.m.