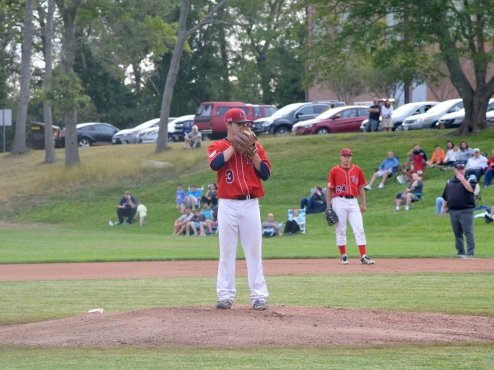 ?It always feels good any time you can help your team win. The defense played great behind me. Anytime your defense picks you up, you have to love that as a pitcher,? said Bailey.

The entirety of Y-D?s offensive production came in the first three innings of the contest. Cole Billingsley (South Alabama) led off the game with a double to right, then came in on a two-out single from Gio Brusa (Pacific), giving the Red Sox an early 1-0 lead.

Y-D added two runs in both the second and third innings. After Michael Donadio (St. John?s) and Luke Bonfield (Arkansas) hit back-to-back singles to start the second, Nathan Rodriguez (Arkansas) grounded out to advance the runners into scoring position. Josh Vidales (Houston) and Billingsley then tallied singles of their own to drive in Donadio and Bonfield and give the Red Sox a 3-0 advantage.

?We had some early runs in the game,? Bailey added. ?That always helps as a pitcher. My teammates played great.?

Vidales and Billingsley added to their RBI totals once again in the third, at which point Y-D concluded its scoring. After reaching on a dropped third strike to lead off the inning, Ryan Noda (Cincinnati) later scored on a bases-loaded walk by Vidales, while Billingsley plated Donadio on a groundout.

Bailey (1-3) shined on the bump for Y-D, holding the visitors to only three hits and striking out eight. Facing no more than four batters in each inning, he worked into the seventh, retiring the first two men he faced in that frame.

Cory Malcom (Arkansas Little Rock) relieved Bailey in the seventh and pitched the balance of the game, facing the minimum over 2.1 perfect innings. He threw just 21 pitches in that span?17 of which were strikes?en route to Y-D?s first win over Orleans in 2015.

The Red Sox travel to Veterans Field Saturday to face the Chatham Anglers, with first pitch scheduled for 7 p.m.