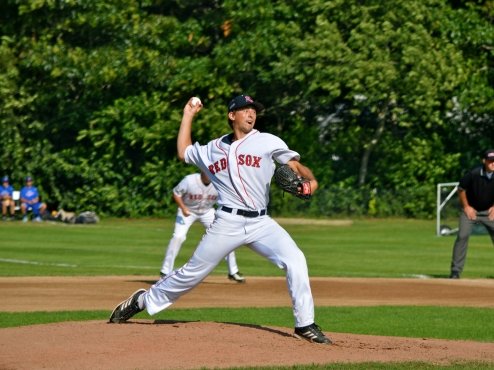 Cody Poteet (UCLA) had another great performance for the Yarmouth-Dennis Red as he struck out eight. Poteet will finish his Y-D career with a 4-0 record and a 3.09 ERA. Photo by Kyra McDonald/Y-D Red Sox

SOUTH YARMOUTH, Mass. ? There wasn?t an empty seat on the bleachers or the lawn at Red Wilson Field on Tuesday night as Cape baseball fans came to watch the Red Sox take on the Orleans Firebirds. Fans came to the game knowing that this was a huge East division matchup. Orleans and Y-D have met six times this season and with the win in their last regular season meeting, Y-D evened the series 3-3.

Getting the save for the Red Sox was Phil Bickford (Cal St Fullerton). Bickford struck out the first Firebird batter and put out the next two more batters to close out the game.

The Firebirds? RJ Ybarra (Arizona State) scored the first run of the game in the second inning on a double to left center field by Cole Peragine (Stony Brook). Two more innings would pass until Y-D?s first run of the game. Andrew Stevenson (LSU) grounded out to first base but Brennon Lund (BYU) would score the tying run.

With two outs in the fourth inning, Y-D would tack on two more runs thanks to a Josh Lester (Missouri) 2-run RBI double. San Francisco teammates Derek Atkinson and Nico Giarratano would both score. Three hits, three runs for the Red Sox.

After giving up two runs in the sixth inning, Poteet bounced back by getting out of a jam in the seventh with back to back strikeouts.

With Y-D?s win over Orleans (5-3) and Wareham?s win over Harwich (3-2) on Tuesday night, the Red Sox move into a three-way tie for first place in the East division. Y-D, Orleans, and Harwich each have 46 points.

Y-D will travel to Veteran?s Field tomorrow night for their last regular season meeting against the Chatham Anglers. First pitch is set for 7 pm.?