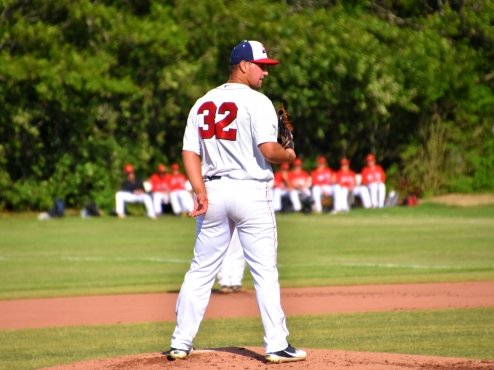 SOUTH YARMOUTH ? The Red Sox saw their four game winning streak come to an abrupt end tonight as they fell 7-4 to the Whitecaps. Y-D made a push in the sixth inning, but Brewster quickly responded and never looked back.

Ian Seymour (Virginia Tech) was on the bump for the Sox and had yet another good performance. In the top of the first, it was overcast and a bit hazy outside. What seemed to be a routine fly ball to end the inning, ended up falling out of Riley King?s (Georgia) glove and allowed a run to score from second base. The 1-0 lead lasted until the top of the third, when the leadoff batter Ryan Bliss (Auburn) and Brett Auerbach (South Carolina) hit back to back solo home runs.

Seymour?s day ended after five innings of work, as he gave up three runs (only two earned) on six hits, struck out nine batters, and only walked one. His off-speed stuff was working for him all night long, allowing him to fool a plethora of the Whitecaps? batters. All but one of Brewster?s batters were sat down on strikes. Seymour now has 23 strikeouts in 14.1 innings of work on the summer.

In the home half of the sixth, the Red Sox were able to load the bases with only one out. In stepped Wyatt Young (Pepperdine), who hit a ground ball to the shortstop but reached first base safely on the fielder?s choice. Riley Tirotta (Dayton) scored on the play as Y-D cut into the deficit. In the next at bat, Young took off in an attempt to steal second base. He slid in safely, while Tate Samuelson (Cal Poly) ran home on the throw and scored the second run of the inning, making the score 3-2.

Marcos Castanon (UC Santa Barbara) really opened up the game with a bases clearing double in the seventh inning while the bases were filled with Whitecaps. The 6-2 lead held up into the ninth, when Brewster scored again with a base hit.

The Red Sox didn?t go away easy, however, both Noah Campbell (South Carolina) and Young reached base safely to lead off the inning. Noah Cardenas (UCLA) drove in Campbell with a base hit, giving Y-D some life. Jack-Thomas Wold (UNLV) then grounded into a double play, but Young crossed the plate and made the score 7-4. Although Y-D tried to rally, they went on to lose 7-4 in a game in which they were playing from behind from the start.

Brady Corrigan (Arizona State), Adam Jeannette (Mercyhurst College), and Michael Weisberg (Cal St. Fullerton) all saw action on the mound after Seymour was pulled. Corrigan gave up two earned runs while striking a batter out, and both Jeannette and Weisberg gave up a run apiece.

Yarmouth-Dennis had taken sole possession of first place of the East Division yesterday, but are now tied with Brewster for second after the loss. The Orleans Firebirds have moved into first place with their win tonight.

The Red Sox will have a chance at revenge tomorrow night when they travel to Brewster for a rematch at 5:00 P.M. at Stony Brook Field.