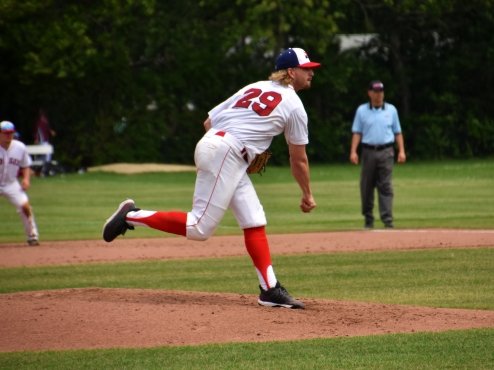 BREWSTER ? The last time the Yarmouth-Dennis Red Sox played a game at Stony Brook Field, the home of the Brewster Whitecaps, they were knocked out of the playoffs in a 12-2 loss. In fact, the Red Sox didn?t win a single game in Brewster last year ? they dropped two games and tied twice. Behind Arizona State pitcher Boyd Vander Kooi?s best outing of the year, solid defense, and 11 base hits, the Red Sox broke the Stony Brook curse and bounced back from the previous night?s 7-4 loss to the Whitecaps.

The other side of the Cape was hit by a torrential downpour, cancelling the Falmouth Commodores and Chatham Anglers game in Falmouth. Although dark, ominous clouds swarmed in the distance throughout most of the Y-D and Brewster game, the rainstorm never hit. Vander Kooi was originally supposed to get the start for the Red Sox, but the Y-D coaching staff prepared for incoming rain and a potential delay or cancellation. Once it became evident that they would get all nine innings in, Pickler called Vander Kooi in from the bullpen and allowed him to throw the last five innings of the game.

Vander Kooi appeared to be unfazed by the sudden change of plans, giving up just four hits, two walks, and two runs ? one earned ? to get the save.

?I just treated it as a start,? Vander Kooi said. ?It?s a little different. I haven?t [pitched in relief] in a long time, but you gotta adapt to it and keep your mentality, and I think I did that.?

Brandon Dufault (Northeastern) threw the first 1.1 innings of the game and gave up just one hit and one walk. Chase Smith (Pitt) earned the win after giving up just two hits in 2.2 innings.

Austin Wells (Arizona) had an uncharacteristic performance at the plate Saturday, going 0-4 with three strikeouts. Red Sox Manager Scott Pickler called the league leader in home runs over during batting practice Sunday to tell him to fire his backside. On the first pitch he saw in the top of the first inning, Wells hit a sharp liner into center field for his first base hit of the night. After a 3-4 performance that included a walk and two stolen bases, Wells now boasts a .300 batting clip.

The other top producer of the night for the Red Sox was shortstop Wyatt Young (Pepperdine), who went 2-5 and scored two runs. Former Y-D shortstop Luke Waddell (Georgia Tech) left to try out for the USA Baseball Collegiate National Team in Cary, NC, prompting Pickler to move Young from second base to shortstop. Young has been sensational at the position over the past few days ? his transition time, throws, and glove have all impressed. He began the summer as a temporary player, but with a .342 batting average in 38 at-bats and the way he?s been playing in the field, it?s hard to imagine Young will go anywhere anytime soon.

The Red Sox got on the board in the top of the second, beginning with a bloop single by Brad Beesley (Cal Poly San Luis Obispo) followed by a base hit by Young. Both Red Sox advanced 90 feet on a passed ball by the Brewster catcher and were hit in on RBI groundouts by R.J. Yeager (Mercer) and Sam Hall (Clemson).

The Whitecaps made it a 2-1 ballgame in the bottom of the fifth, capitalizing on a leadoff walk, a fielder?s choice, and a tough error. Third baseman Riley King (Georgia) made a phenomenal diving stop ? the first of two diving plays he made last night ? on a ball sharply hit down the third baseline, but the Red Sox first baseman wasn?t able to cleanly pick King?s one-hop throw.

Neither team scored again until the eighth inning. Beesley drew a walk, Young roped a line drive into the right field gap to put runners on the corners, and Yeager smoked a ball off of the Brewster third baseman?s glove to tack on another run for the Red Sox. With two outs, Wells walked on four straight balls, and Eyster broke the game open with a two-RBI liner into the right field gap.

Brewster scored one more run in the bottom of the eighth inning, but the Red Sox held on to improve their record to 9-5-1, good enough for second place in the East Division behind the Orleans Firebirds. Y-D will travel to Chatham tonight to make up a game that was postponed on June 21 due to fog. First pitch is set for 7 p.m.