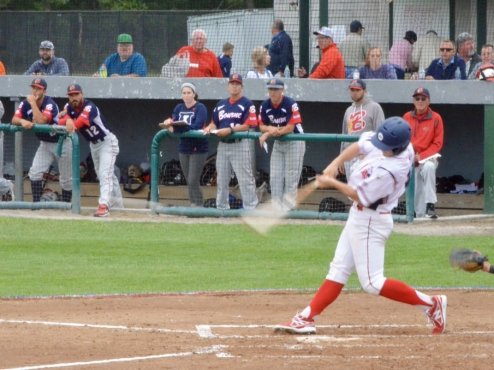 BOURNE, Mass. ? Despite a great effort by JJ Muno (UC Santa Barbara), the Yarmouth-Dennis Red Sox dropped a close one to the Bourne Braves, 3-1, Sunday night at Doran Park.

Muno went 1-for-4 at the plate with a double, but what stood out was his defense. He had an impressive game at third, flashing the glove and showing off his strong arm. Matt Winaker (Stanford) was the other Y-D player to get a hit, as they were held to two in the contest.

Jared Janczak (TCU) made his first start for Y-D, tossing five innings, giving up only two hits with no earned runs. Michael Dibrell (Kennesaw St.) was on the hill for Bourne pitching for six frames, giving up two hits and only one earned run. Both got the no-decision in the ballgame.

Pat Vanderslice (Saint Joseph?s, 0-5) was credited with the loss, while Chad Luensmann (Nebraska Lincoln, 2-1) picked up his second win of the season.

In the top of the third Winaker smoked a liner into right just barely getting past the outstretched glove of the diving Jake Mangum (Mississippi St.). Winaker would easily get a triple with one out, and would cross the plate on a fielder?s choice to second by Connor Wanhanen (TCU). This gave the Red Sox an early 1-0 lead.

Bourne would push across their first run of the game in the bottom of the sixth. Mangum reached first on a fielder?s choice with one out. After a Justin Yurchak (Binghamton) single, Mangum easily made it to third with his speed. After a blooper over Smith?s head into shallow left-center hit by David Mackinnon (Hartford), Mangum scored tying the ballgame.

Brennan Breaux (LSU) got the bottom of the eighth started by drawing a walk. Willy Yahn (Connecticut) was hit by a pitch, putting two on with no outs. Breaux would cross the dish off of a Mangum RBI single, giving Bourne the lead. A sacrifice fly to center field by Yurchak would knock in Yahn, giving Bourne a two-run cushion.

Andrew Wantz (North Carolina Greensboro) came in to close, retiring the Red Sox in order, and picking up his fourth save of the summer season.

The Red Sox take on the Brewster Whitecaps on Tuesday at Red Wilson Field. First pitch is at 5 p.m.