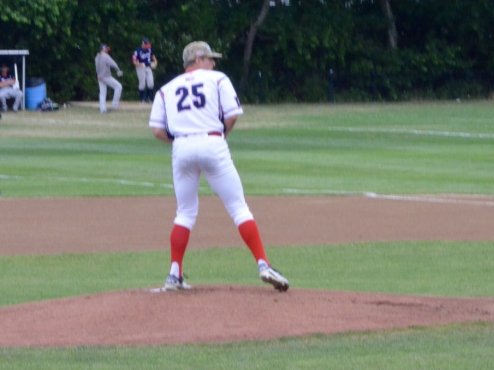 Jaskie tossed for six innings and had one strikeout. He only allowed four hits and one run, which was unearned. He was credited with his first win of the season. Both relievers for Y-D were lights out, as well. Nathan Kuchta (San Diego) went for two innings, with two strikeouts and no earned runs. Bryan Pall (Michigan), came in to close it in the bottom of the ninth, earning his sixth save.

Patrick Raby (Vanderbilt, 1-2) was on the hill for Bourne slinging for 4.1 innings, with two strikeouts and three earned runs.

On the offensive side of the ball, JJ Muno (UC Santa Barbra) led the charge for Y-D. He was 2-for-2 at the plate, with one RBI and one run scored. Will Toffey (Vanderbilt) also had two hits in the contest.

Bourne was the first to push a run across the board. Willy Yahn (Connecticut) led off the top of the second inning with a standup double. He would come around and score off of a throwing error, as the Braves picked up an early lead. However, Y-D answered with two runs of their own in the bottom half of the inning. Deon Stafford (Saint Joseph?s) got it started with a single, and crossed the dish on a grounder hit to shortstop by Matt Whatley (Oral Roberts). Muno knocked in Kevin Smith (Maryland) with an RBI single to give the Red Sox the lead.

Muno led off the fifth with a screaming line drive into right and hustled his way to third for a well-deserved triple. He then crossed the plate off of an error, giving the Red Sox a two-run cushion.

From this point forward, the stellar Y-D pitching shut the Bourne offense down.

Jaskie had an impressive 2016 season and is showing success here on the Cape. He had a 3.19 ERA with a 7-3 record at Michigan. With Y-D he currently has a 0.77 ERA with 11.2 innings pitched so far this summer campaign. He tossed a team-leading 79 innings with the Wolverines and went a season-high seven innings in four separate starts. This shows he is durable and capable of going deep in ballgames, which is a huge asset for the Red Sox. He didn?t give up an earned run until his fourth start with Michigan, and only has given up one so far in his first two starts.

With the win, Y-D extended their winning streak to four games and are 8-2 in their last 10 games. They are 1.5 games out of first place behind Harwich.

The Red Sox face off against the Bourne Braves on Sunday at Doran Park. Game time is at 6 p.m.