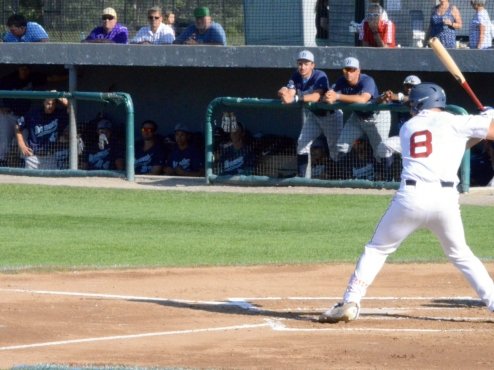 SOUTH YARMOUTH, Mass. ? The Yarmouth-Dennis Red Sox (16-11) defeated the Brewster Whitecaps (11-15) on Tuesday night by a score of 9-5. After losing a four-run lead in the eighth inning, the Red Sox battled back to push across four runs in the bottom of the eighth, and put the game out of reach from the Whitecaps.

Connor Seabold (1-1) made his first start of the season for the Red Sox, as the team continues to move arms from the bullpen to the rotation. Seabold had allowed three earned runs in 3.2 innings of relief this summer, but made 13 starts for California State Fullerton this past season and posted a 2.48 ERA. He pitched well in 6.1 innings of work on Tuesday night, yielding two runs and allowing just four hits.

Opposing Seabold was Zac Lowther (Xavier, 2-1), who entered the game with a 2.46 ERA in seven relief appearances for Brewster. In 14.2 innings, Lowther struck out 28 hitters, which is one of the highest strikeout rates in the league. On Tuesday night the Whitecaps made three errors behind him in 5.1 innings to allow three unearned runs, and Lowther finished with one earned run and an incredible nine strikeouts.

The Red Sox got on the board first, pushing across a run in the bottom of the second after two costly errors by the Whitecaps. Kevin Smith (Maryland) and JJ Schwarz (Florida) reached on an error and a single, respectively, to start the inning. With two outs, Matt Winaker (Stanford) hit a low line drive to AJ Graffanino (Washington) at shortstop, who briefly misplayed it before rushing the throw to first and skipping the ball past the first baseman. Smith came around to score on the play, giving the Red Sox the lead.

In the following inning, Brendan Skidmore (Binghamton) lined a single to center field, and Kevin Smith drove him in with a towering home run over the right field fence. These runs were not charged to Lowther, but gave the Red Sox a 3-0 lead nonetheless.

Brewster responded in the top of the fourth, however, as Bryce Jordan (Louisiana State) led off the inning with a double. Brent Rooker (Mississippi State) then doubled to left-center field, scoring Jordan and making it 3-1.

Y-D seemed to be safe after Matt Winaker hit a two-run single in the sixth, pushing the lead to 5-1. But, the Whitecaps were able to push two runs across in the seventh on a single by Kel Johnson (Georgia Tech) off of Collin Snider (Vanderbilt) and a RBI groundout by Jordan off of Calvin Faucher (California Irvine) and cut the deficit to 5-3.

A leadoff walk came back to hurt the Red Sox in the next inning, as Brewster again put runners in scoring position for Johnson, who drove in two runs on a weak line drive to right field. This tied the game, 5-5, entering the bottom of the eighth inning.

But, the Y-D offense exploded in the next half inning, as four Red Sox came across the plate and Y-D retook the lead. With runners on second and third, the Whitecaps pulled the corner infielders in, expecting a squeeze play from Nolan Brown (Texas Christian). Brown instead smashed a line drive past the pitcher and into center field, scoring what would eventually be the winning run. The Red Sox added insurance runs on doubles by Winaker and JJ Muno (California Santa Barbara), extending the lead to 9-5.

Bryan Pall (Michigan) shut down the Whitecaps in the top of the ninth and earned the victory, moving to 1-0 on the season. The win puts the Red Sox just two points behind the Harwich Mariners for first place in the division and gives them the second-most points in the league. The Red Sox are 8-2 in their last 10 games.

Y-D will be back in action on Wednesday night in Orleans at Eldredge Park, with the first pitch coming at 7 p.m.