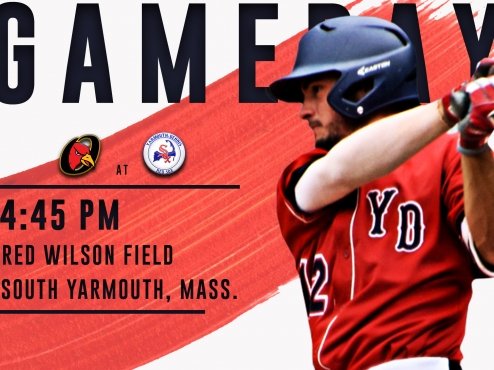 SOUTH YARMOUTH – The Red Sox lost 7-2 on Monday night against their probable first round playoff matchup, the Orleans Firebirds. While the loss is of course not ideal, it most likely won’t have any effect on playoff seeding.

Orleans struck first with a run in the second inning. Rob Emery (San Francisco) got on base with a double before advancing to third with two outs. With two strikes in the next at bat, Red Sox starter John Beller (USC) made a costly mistake as he balked, allowing Emery to score from third.

In the home half of the inning the Red Sox quickly responded. Both Noah Campbell (South Carolina) and Carson Taylor (Virginia Tech) led off with singles. Campbell then scored on a wild pitch in the following at bat. With two outs, Tate Samuelson (Cal Poly) beat out an infield single in which Taylor scored on. Y-D took a 2-1 lead into the third, when Beller started to really settle in.

He struck two batters out in each of the next two innings as he retired six straight. Emery then got the best of him once again to leadoff the fifth, blasting a solo home run on the first pitch he saw. Beller retired the next two batters, before Tanner Murray (UC Davis) hit a solo shot of his own. Beller’s day ended after the fifth, he gave up three runs on four hits, struck out six, and didn’t walk anyone.

The Firebirds went into the sixth with a 3-2 lead and began scoring insurance runs. They brought one across the plate and then two more in the seventh, before scoring their final run in the ninth. While trailing 7-2, the Red Sox got runners to second and third with two outs in the home half of the inning but left them stranded there. Orleans won 7-2, ending Y-D’s two game winning streak.

With two games remaining, the Red Sox still only trail the Anglers by one point. The problem is that Chatham has four games left to play, meaning they have more room for error. Assuming the standings stay the way they are, Y-D will play Orleans while Chatham will play Harwich. If the Red Sox are somehow able to catch the Anglers, they would have home field throughout the East playoffs and would host the Mariners.

Y-D will travel to Hyannis to play the Harbor Hawks at McKeon Park at 6:00 P.M. on Tuesday for game one of a home and home.