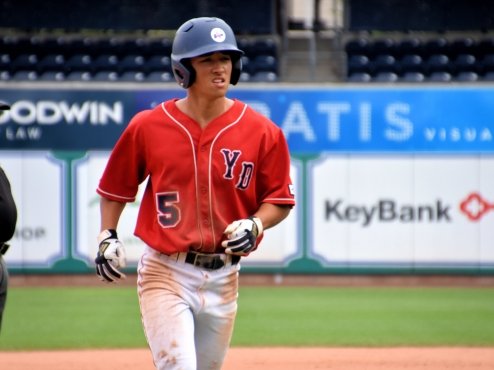 HYANNIS ? The East Division playoff bracket became a little more interesting Tuesday night as the Yarmouth-Dennis Red Sox lost 1-0 to the West Division?s last-place team, the Hyannis Harbor Hawks. A Y-D loss, two Orleans Firebirds wins, and two Chatham Anglers losses shuffled the standings around ? Orleans and Chatham are now tied for first place with 48 points, while Y-D trails by one point. While this Red Sox team is talented enough to win it all, the worst team in the league ? the 8-32-3 Harbor Hawks ? held Y-D to just one hit and no runs. The Y-D bats went quiet, and the dugout was silent ? a bad sign for the Red Sox as they head into the postseason Friday.

Brad Beesley (Cal Poly San Luis Obispo) singled into center field on the second play of the game but was the first and last Red Sock to record a hit all night. Tommy McCollum (Wingate) threw six scoreless innings for the Harbor Hawks, giving up the hit to Beesley, one walk, and striking out four to bring his ERA down to 2.38. Landon Kelly (Memphis) threw three scoreless innings in relief.

An 0-4 performance at the plate by Austin Wells (Arizona) brought his average down to .314 and hurt his chances of beating out Cotuit?s Nick Gonzales for Cape League MVP. Wyatt Young (Pepperdine) went from leading the league in batting average to fifth as an 0-4 performance brought his average down to .338. Gonzales and Zach DeLoach of Falmouth now lead the league at .349, with Max Troiani of Orleans and Dusty Baker of Wareham just behind them at .346 and .342, respectively. Y-D?s Noah Campbell (South Carolina) and Riley King (Georgia) are right behind Young with .324 and .323 respective batting averages.

Despite having a strong outing, Ryan Hare (UNLV) got the loss for the Red Sox. He struck out three batters and gave up four hits and one unearned run in four innings of work. The run came on a hard grounder that slipped under the mitt of a Y-D infielder in the bottom of the fourth inning.

Carlos Lomeli (St. Mary?s) had his best showing in weeks, giving up just two hits and striking out three batters in two innings of work. Jacob Winger (High Point) was once again exceptional, giving up no hits and striking out one in one inning pitched, and Oscar Carvajal (Fresno State) walked two and struck out three in one inning. Winger and Carvajal now have an ERA of 1.04 and 2.89, respectively.

The Red Sox have a chance to demonstrate heart and carry some momentum into the playoffs as they take on the Harbor Hawks for the second time in as many days tonight at Red Wilson Field. The first pitch of the Red Sox?s last regular season game of the summer is set for 4:45 p.m.

Playoffs: The last-place team in each division is automatically eliminated from the playoffs, meaning neither Hyannis or the Brewster Whitecaps will get an opportunity to compete for a championship. The Firebirds? ascension to first place makes the East Division bracket interesting ? Orleans and Chatham will battle it out for sole possession of the division tonight at 7 p.m. The first-place team will play the fourth-place team ? likely Harwich at this point ? while the second and third-place teams will face each other in the first round.

Chatham has the worst offense in the Cape League, which is strange considering they?ve sat at the top of the East Division for well over a month. The Anglers? team batting average is .231 compared to the Red Sox?s .263 batting average, yet Chatham has had Y-D?s number all year. The Red Sox are 0-5-1 against the Anglers and have only scored 10 runs while giving up 36.

The Orleans offense is seventh in the league with a .243 batting average and first as a pitching staff with a 3.35 ERA. The Red Sox are 4-2 against the Firebirds this summer but have lost the last two matchups 15-3 and 7-2. Y-D is 3-2-1 against Harwich this season, but it?s highly unlikely that the Red Sox and Mariners will face off, as the Red Sox will either finish second or third in the East Division, and Harwich will likely finish fourth.