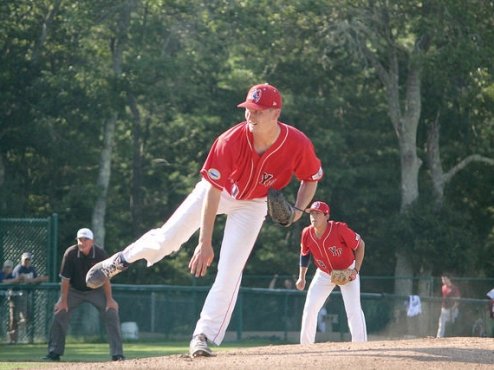 Hunter Parsons made quick work of the strongest part of the Cotuit lineup.? With two outs and in a bit of trouble, Parsons readied as Gian Martellini entered the box.? The 1-1 pitch he looped out into right field, Parsons pointed his finger into the sky locating the ball traveling to the line. Luke Miller had a long run, but the field territory looked to come to Y-D?s rescue. But, with the way the game had been going, that was an unlikely occurrence.

?It kind of sucks,? Parsons said. ?I made some quality pitches, but they just put that one on the line at the end.?

The Red Sox lost to the Kettleers 6-3 in part because of some unfortunate outcomes on close plays. That ball that dunked in on the right field line, scoring two runs, was just one of three plays like that which didn?t end positively for Y-D. Red Sox pitchers and hitters were not having great luck all game long.

Despite giving up two runs on that play, Parsons said that he is happy with some of the pitches he made and will build off them during his next outing. That mindset is a similar one to the Red Sox team that, despite Cotuit doubling its score, collected nine hits to the Kettleers eleven.

But, the Red Sox bad luck was apparent. Carlos Cortes, in the first inning, dunked what appeared to be a single into shallow left-center field. Rather than falling in like when the Red Sox were on the defensive side, the Cotuit center-fielder made a diving catch to record the out and end the inning. Cortes, who is now hitless in his last at-bats, looked to the sky and shook his head as he slowed his run to first.

Going into the game, the Red Sox were just one point shy of first-place Orleans for the Eastern Division lead. The Red Sox hadn?t won back to back games since its nine-game win streak was snapped on July 26th. With the Firebirds win, Y-D is now locked into the second place spot and just waiting for the outcomes of the seasons final games to determine who they will be facing in the first round.

Josh McMinn started the game and had an okay outing if it were not for a tough first inning in which he allowed two runs on three hits. He noted that after that inning he didn?t really allow the Kettleers to get many hard-hit balls off him.? But, in a bit of foreshadowing, a fly ball dropped in on the right-field foul line for a double which scored Cotuit?s second run of the inning and ended McMinn?s outing.

?They hit four balls that were in or within five feet of the lines,? McMinn said. ?Balls landed for them and they didn?t of us.?

He went on to echo Parsons? sentiment, saying ?baseballs weird? because on any given day a good team could lose and a bad team can win.

Despite the Recent skid, the second straight loss marks the first time the Red Sox have lost back-to-back games since July 4th.

The Y-D players do not wish to hold onto the memories of this game. The Red Sox have its eyes on the future.

?We?re just trying to get momentum going into the playoffs,? McMinn said. ?It?s not the end of the world.?