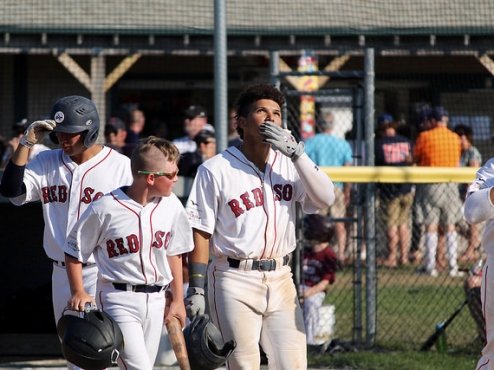 Carlos Cortes slid into third base sending dirt flying out from beneath him. He popped up, wiped his jersey and turned to his coach, who gave him a firm handshake.

Cortes nodded and let out a big smile, amused by what just happened. He was on fire for the first time in a while and he was just enjoying the moment.

Carlos Cortes lead the Y-D offense to a 12-4 rout of Cotuit in the final game of the Cape Cod baseball league regular season.? In a game that featured four Red Sox home runs, Cortes led the way, reaching base safely all five times he stepped to the plate. It was a refreshing game for Cortes, who?s been slumping as of late.

?I was thinking, ?wow, finally,?? Cortes said. ?It feels good to finally get the weight to come off.?

Cortes has long awaited this moment.? Coming into the game, he was hitless in his last 29 at-bats. He responded at his home ?Red? Wilson field; he was just a double shy of the cycle, scoring three runs and driving in four.? In a game where Y-D had its most explosive offensive performance in quite some time, he accounted for more than half of it.

After working a walk in the first inning, he reached base safely for the first time since recording a single in the seventh inning of a game against Wareham on July 21st.

He said it was nice to take away something positive from his first at-bat, being away from the base path for so long, it gave him hope that things would turn around.? Still looking for his first hit, Cortes stepped to the plate in the second inning with the Red Sox down one and having already scored two in the inning.

Cortes swung on the 0-1 pitch and belted it into right-center field. It was a no-doubter as the Cotuit outfield slowed its pursuit just seconds after the crack of the bat. Cortes sprinted down out of the batter?s box and clapped as he rounded first, grinning ear to ear as he slowed his run to a jog. As he approached closer to home, he saw his teammates all celebrating and began to laugh. ?He threw his arms up in celebration as he touched the plate and the Y-D dugout exploded.? Players met him halfway and gave him hugs as he stripped off his equipment. It was a triumphant moment for Cortes, one his teammates made possible.

?Everyone in the dugout knew, they were so happy,? Cortes said laughing, completely overjoyed. ?I finally hit a ball hard, it finally went my way.?

In a game that the Kettleers pitched three position players, the Red Sox looked to be just having a fun time, with many people coming alive in the loose environment.

On Cortes? last at-bat, he laced a ground ball that passed into the outfield. Rounding first base, and knowing that he was just a double shy of a huge milestone, Cortes stutter-stepped and looked to see if two was available before quickly returning to the base. He laughed and said that his teammates were messing with him in the dugout, telling him he needed to try to take two no matter what he hits. He decided to play it safe because he said if he gets thrown out trying to stretch the single, Pickler would ?eat him up.?

Carter Pharis, who saw himself hit a home run for the first time this season as a part of the home run barage in the second inning, was proud of the game his teammate had.

?I love the way he grinded, they finally started falling for him today,? Pharis said. ?It?s a testament to how he?s handled adversity, it?s awesome.?

Following Brewster?s win over Harwich, the Whitecaps clinched the third seed and a date with the Red Sox for the opening round matchup of the playoffs. The Red Sox were locked into the two-seed due to an Orleans win and a Y-D loss on Wednesday.

Going into the series, the explosion was extremely important for the Red Sox, who for long have been saying they are just looking to get hot when it counts.

More than anything, Cortes needed a game like this. While the game had no bearing for the Red Sox, it may ignite a spark in one of Y-D?s most explosive players.