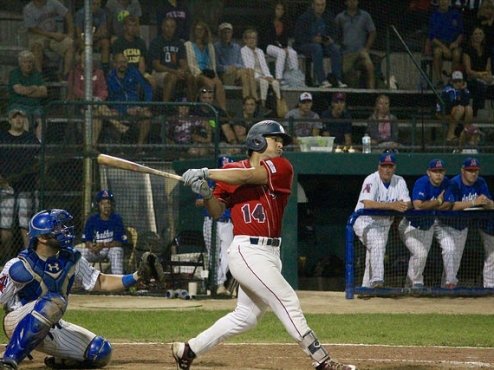 The lights at Veterans field shined bright onto Christian Koss who was crouched to his knees with his head tilted down. The Chatham crowd of nearly two thousand cheered as he looked towards the ground. He had just overthrown Nico Hoerner at second for what would have been the final out of the inning, allowing the Anglers to score its fourth and final run. While it was not a decisive play in the game, it?s a play Koss wishes he could have back.

?That?s a momentum booster and killer,? Koss said. ?It?s not a routine play, but it?s a play I know I could?ve made.?

Disappointing plays plagued the Red Sox in its 4-2 loss to Chatham.? Overthrows and huge strikeouts painted the biggest moments of the game for Y-D. The crowd on hand was unlike any crowd the Red Sox had seen this season and the intensity of the game took over in the defeat.

?It?s a great atmosphere and you want to be able to make those plays,? Koss said. ?It just kind of hit me.?

Unfortunate outcomes were easy to come by on Tuesday for the Red Sox. In the fifth inning of the game, Luke Miller stepped up to the plate looking to break the game open, still scoreless. He responded with a high fly ball to the left-field fence, a play that the Y-D faithful reacted favorably to, that hung in in the air for several seconds before dropping in the mitt of the Chatham left fielder bound to the wall.

Instead of breaking the game open, that play was the start of a 1-2-3 inning for the Red Sox, where the Anglers would score a run in the bottom.

The lights and the crowd were uncontrollable factors for the Red Sox. In the eighth inning, as Jacob Wloczewski readied for a 3-2 pitch, a car alarm blared in the background tainting the moment for Y-D. Wloczewski walked the batter, which later lead to a run to score on Koss? errant throw.

In the top of the ninth, the Red Sox had one last opportunity to make something happen. Drew Mendoza, who while the Red Sox were in the field sat behind the ball screen adjacent to the Y-D dugout with his bat in hand and helmet on readying for the at-bat, struck out to record the first Red Sox out of the inning.

After Luke Miller struck out to make it two outs, Connor Kaiser worked a walk to put two on for the Red Sox. Right before he took the base, Carlos Cortes turned to Darren Trainor smiled and shook his head, knowing what situation he was going into. He then nodded at Trainor and approached the box. Chatham pitcher Jack DeGroat needed just four pitches and he was able to fan Cortes for the final out of the game.

?Just try to get a hit, keep the game alive,? Cortes said. ?I missed two pitches that should have hit hard.?

Before the play and before any decisive defensive stand, the Chatham press box started a slow clap chant that, at it?s height, let out a thunderous sound of all two thousand fans clapping in unison.

Cortes, who says he plays in front of a crowd of ten thousand in South Carolina, said he didn?t notice the claps, saying it?s ?just fans.?

First place Orleans lost its matchup earlier in the day, making this loss more disappointing for the Red Sox. A win would have given them the first seed in the east on the trek to four straight titles. Though battle for the first seed is enticing, Y-D is more concerned with fighting against its self.

?We?re trying to get better at the things that we need to before (the playoffs) start.,? Koss said. ?Whether we go in first, second, fourth, if we are in, we?re going to compete.?