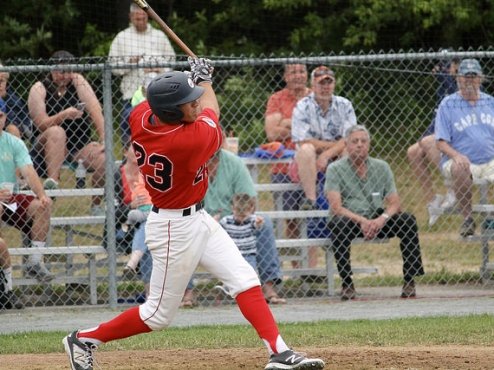 rn By Michael McClearyrnrnThe Red Sox have become accustomed to hot streaks. ?The team, which leads the Cape Cod baseball?league with a .285 batting average, just was waiting for whoever is next. ?Alex McKenna is that guy.rnrn”I’m just sticking to my approach,” McKenna said. “Just having confidence. Facing arms like this, you got to be really focused every at bat.”rnrnMcKenna had been on a tear as of late. ?His double in the third inning added on to his now six-game hitting streak. Following a rough first two innings offensively, McKenna drove in the first and tying runs for Y-D to propel them back into the game. ?rnrn”We’re all very confident in our ability to get back in the game,” Mckenna said. “Anytime you can put together a tying RBI it gets people fired up. That’s just kind of how it happened.”rnrnMcKenna has recorded a multi-hit game?in three of the six contests during his six-game streak. Over that span, he has raised his batting average from a respectable .296 to a scorching .360.rnrnGoing 3-4 in Saturday’s contest, McKenna sparked an offense that looked like it was on its way to a third loss in its past four games.?rnrn”Any time you can put up double digit hits, you’re?looking pretty good,” Christian Koss said. “When we get good balls to hit, we’re a dangerous group.”rnrnThe Red Sox came together nicely following the first two innings in which it couldn’t get much going. ?Only having one hit on the board after the first two, the team recorded twelve hits from the third inning through the eighth inning when the game was called due to darkness.rnrnKoss, who leads the team in batting average at .385 and recorded the games second?RBI, praised McKenna for his fortunes over the past few games. ?rnrn”He just takes good (at-bats),” Koss said. “He’s hitting bad pitches and laying off some good ones, he just looks locked in.”rnrnKoss went on to say that McKenna spends most of his time in the batting cage. He labeled him a “workhorse” and says that he’s doing all that he has to lead Y-D to wins. ?rnrnManager Scott Pickler said that the best thing about the team is that no one person is carrying the offense. Despite the three hits and .750 day McKenna had at the plate, there were still ten other hits in what turned out to be an explosive offensive day.rnrn”Up and down the lineup, we had quality at-bats,” Pickler said. “When they get their opportunities, they’re answering the call.”rn