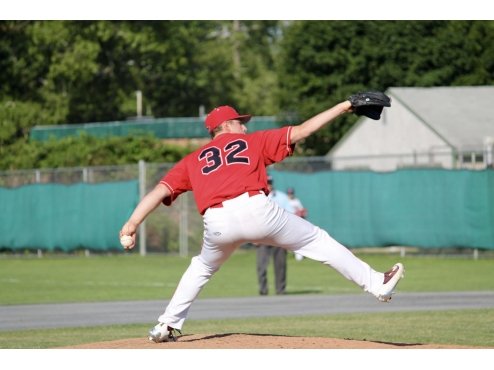 rn By Lance Reynoldsrnrn?rnrnKris Bubic got off to a fast start on the mound Sunday in Wareham – striking out four Gatemen through the first three innings while allowing just one runner to reach second.rnrn?rnrnBubic then gave up two hits in the fourth inning, including a two-run home run into Spillane Field?s left field bleachers. The left-handed starting pitcher from Stanford rebounded effectively on his way to pitching 5.2 innings.rnrn?rnrnHowever, the home run was the only offense that Wareham needed as the Y-D offense was held off the scoreboard for the first time this season in a 4-0 loss.rnrn?rnrn?Our defense wasn?t great today, we had some opportunities to score, but didn?t produce,? said Red Sox starting catcher Cooper Johnson. ?Our offense has been so good lately – guys driving the ball through the gaps and staying with a good approach. I think we leaned away from that approach today.?rnrn?rnrnBubic struck out at least one batter in each one of the innings he completed, including striking out two in the third and fourth innings. The starter finished with a final line of 5.2 innings pitched while giving up two runs on four hits and one walk while striking out seven.rnrn?rnrn?I thought he threw really well,? Johnson said. ?He spotted up, he threw his fastball where it was supposed to go. He made one mistake, and the hitter put a really good swing on the ball.?rnrn?rnrnWareham?s Willy MacIver hit a weak pop-up into shallow centerfield with two outs in the bottom of the fourth, but Y-D second baseman Christian Koss couldn?t catch the ball cleanly allowing MacIver to land on second with a double. MacIver was brought in for the first run of the game on a Jake Anchia two-run homer.rnrn?rnrnThe Gatemen struck for two more runs in the bottom of the seventh on three singles to take a 4-0 lead.rnrn?rnrnThe Red Sox were held to just four hits and the team never placed a runner on third base.rnrn?rnrnY-D (10-7-1) visits Chatham for a 7:00 pm first pitch at Veterans Field Monday before returning to Red Wilson Field to take on Hyannis for a Fourth of July matchup Tuesday.rnrn?rnrn?rnrn?rnrn?rnrn?rnrn?rnrn?rn