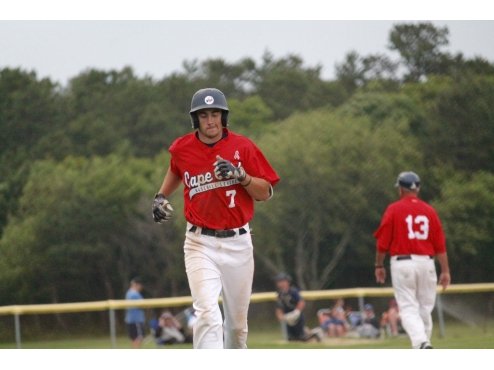 rn By Lance ReynoldsrnrnSOUTH YARMOUTH, Mass. – Holding a slim 2-1 lead going into the bottom of the eighth inning, all that the Y-D Red Sox were looking for was an insurance run to hand over to closer Riley McCauley.rnrn?rnrnConsidering that the Red Sox offense was shutout after their first three at-bats of the game and that they had squandered away opportunity after opportunity, what they received in the eighth was more than anyone could have expected in Friday?s 4-3 victory over the Bourne Braves at Red Wilson Field.rnrn?rnrnWith one out, Nick Quintana strode to the plate looking to gain some self-revenge and momentum for the Y-D offense. In the third inning, the third baseman popped out to end the frame with runners on second and third. In the fifth, Quintana grounded into an inning-ending double play with the bases loaded.rnrn?rnrn?I could have done my part to help the team a lot better throughout the game,? Quintana said. ?Leaving runners on base, and for me, I feel like I was just trying to do too much.?rnrn?rnrnWith all of this added up against him, Quintana didn?t step away from the spotlight.rnrn?rnrnOn the very first pitch of the at-bat against Bourne?s Nick Johnson, Quintana rose to the occasion and crushed a solo homer over the centerfield fence to put the Red Sox ahead 3-1.rnrn?rnrn?I necessarily wasn?t sitting on off-speed, but I knew it was going to come,? Quintana said. ?[I] saw it and tried to put a good swing on it.?rnrn?rnrnTwo pitches after Quintana?s blast, shortstop Connor Kaiser jogged around the bases after hitting a homer of his own over the centerfield fence for Y-D?s fourth run.rnrn?rnrn?I was just trying to relax,? Kaiser said. ?[Johnson] had been kind-of living down in the zone, so I knew I wanted to get into position to hit early and put a good swing on the ball.?rnrn?rnrnHanding over a 4-1 lead to McCauley, who had converted on all five of his save opportunities entering Friday, seemed like it was one that McCauley could pitch with relative ease.rnrn?rnrnAfter walking Jared Triolo, however, McCauley served up his first home run of the season to Turner Brown making it a 4-3 ballgame. McCauley stayed relaxed, though, and picked up two strikeouts to finish the game.rnrn?rnrnKaiser?s first home run of the season couldn?t have come at a better time, as it turned to be the difference-maker in Friday?s win.rnrn?rnrn?It turned out to be big,? Kaiser said of his homer. ?It was a good win. Riley came back and threw strikes and got it done for us.?rnrn?rnrnThe Red Sox jumped out to early 2-0 lead on their first three at-bats in the opening frame of the game. Nico Hoerner led off with a single and came around with the first run on a Kyle Isbel double to deep right, and Isbel scored the second on an Alex McKenna single.rnrn?rnrnSpencer Van Scoyoc threw four innings in his second start of the season allowing just one run on five hits and two walks. The lefty recorded two strikeouts.rnrn?rnrnVan Scoyoc worked around a few jams in his four innings, including getting out of a first-and-second no-out jam in the first, and a second-and-third two-out jam in the second.rnrn?rnrn?We have a good defense behind me,? Van Scoyoc said. ?So, I don?t have to be too picky on my pitches. They usually pick me up.?rnrn?rnrnY-D (9-6-1) is back on the road Saturday in Brewster for a 5:00 pm first pitch at Stony Brook. The Red Sox return to Red Wilson Field Tuesday for a Fourth of July matchup against Hyannis.rnrn?rn