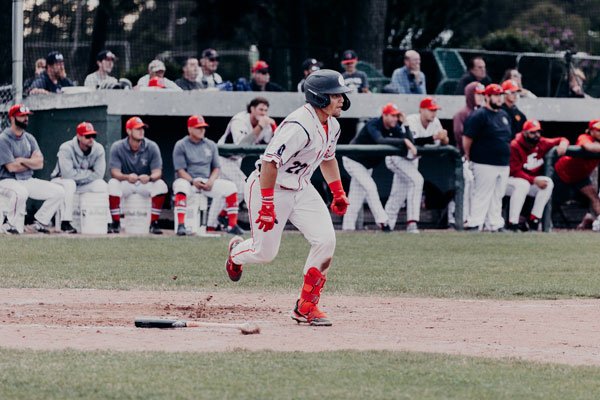 You never know what you’ll see at the ballpark. Some days it’s a pitcher’s duel, some days it’s an offensive battle. Baseball is funny that way.

Some days, a team sets a modern-era league record for hit-by-pitches in a game.

That’s exactly what the Yarmouth-Dennis Red Sox did Saturday night at Red Wilson Field, ending up on the receiving end of seven errant Harwich Mariner pitches. The Red Sox capitalized on the extra baserunners, running away with a 11-0 win thanks to a six-run first inning. The game was called after seven innings due to darkness.

“I was saying that during the game, that we were gonna get a record,” said third baseman Mike Boeve, who was plunked twice. “As long as we’re going to win while getting a record, it’s a good thing.”

The previous record in the Pointstreak era was held by the Chatham Anglers, who were hit by six pitches on June 11, 2014 against Orleans. Per Cape League Head Statistician Chris Thoms, 14 teams had been hit five times since the league began using Pointstreak to collect data in 2012, but only Chatham got to six.

The Red Sox got to six after Cole Carrigg was hit for a second time in the third inning, and Cal State Fullerton’s Caden Connor received the auspicious honor of earning the record for Y-D, taking a pitch off the hand in the bottom of the fourth.

“Honestly, that’s a good thing that we get on base,” Connor said. “That’s a weird record to break, but that’s awesome.”

The quest for hit batsmen started in the first inning, with Carrigg, Boeve, and Jonathon Long all earning bruises. The Red Sox chased Harwich starter Noah Dean from the game before he recorded an out, with the aforementioned HBPs as well as a walk and a single.

After Andrew Ronne entered the game on the mound for Harwich, Connor lined a single to right field to score a run, followed by RBIs from Fernando Gonzalez and Gunner Gouldsmith. By the end of the first inning, Y-D led 6-0.

“The whole team had been struggling at the plate, but it felt good to put up a crooked number there today,” Connor said.

Long and William Hamiter each added RBI singles in the fifth inning, as Y-D kept the line moving. With another run coming across due to a wild pitch, Y-D extended the lead to 11.

Y-D got excellent pitching from George Mason’s Jared Lyons, who made his first start of the summer. Lyons pitched six innings, allowing just four hits and zero runs while striking out six.

“It’s cold and windy, no hitter wants to hit in that kind of weather,” Lyons said. “Know all my pitches, be efficient, get quick outs. Everything took care of itself.”

Lyons pitched three no-hit innings to start the day, allowing a walk in the first inning. Later, he worked out of jams in the fourth and fifth innings with runners in scoring position.

Lyons gave way to Ivran Romero after six shutout frames. Romero, making his first appearance of the summer, sent the Mariners down in order to end the inning. With dark clouds rolling in, it became difficult to see clearly, and the umpires called the game after seven innings.

Y-D heads out to Bourne Sunday for a doubleheader, with the first game beginning at 4 p.m. The Red Sox have a day off Monday, then are back at home against the Bourne Braves Tuesday at 5 p.m.

“We’ll keep the bats going hopefully, and go get a couple of wins,” Connor said.