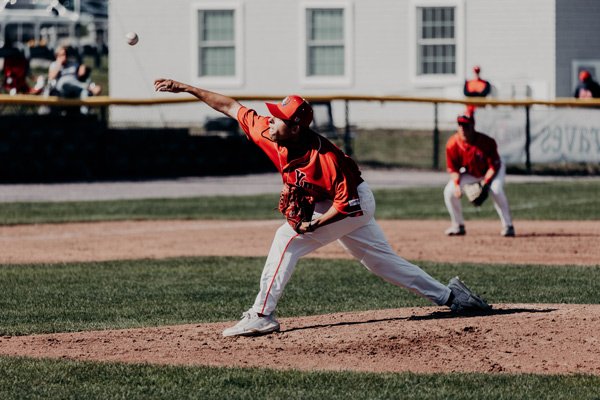 After being rained out on Sunday, the Y-D Red Sox and the Bourne Braves were able to play two games on a beautiful evening Monday at Doran Park.

After taking the first game 4-2, the Red Sox scraped together a comeback from a 2-0 6th inning deficit to earn a 2-2 tie in the nightcap. The 1-0-1 mark on the day moved Y-D to 3-3-2, tying them with Brewster and Harwich for first place with eight points in the East division.

Game one starter Brian Edgington was steller in the afternoon game, his first outing of the summer. In four shutout innings, Edgington struck out four, allowing just two hits and walking two.

Offensively, Mike Boeve led the way for Y-D, going 3-3 with two ground-rule doubles and scoring two runs. His first got the Sox on the board in the second inning, scoring on a throwing error.

Caden Connor added sacrifice flies in both the 4th and 6th innings to make it 3-0, his second and third RBIs of the season.

In the bottom of the sixth, Dylan Ray came out for his second inning of work after retiring the side in the 5th. A runner scored on an error, but Ray had the chance to get out of the inning with just the one run in to preserve a two-run lead.

Bourne catcher Ryan Proto ripped a liner back at Ray, who instinctively stuck out his bare hand to try and catch it. After it deflected off of his throwing hand, he tried to throw the runner out at first, but was unable to get any power behind the throw and spiked it. Another run scored and the go-ahead run moved to scoring position.

Ray was immediately taken out by Field Manager Scott Pickler, and Owen Hackman came in to retire the side and retain the Y-D lead.

In the top of the 7th, Mike Boeve drew a bases-loaded walk to tack on an insurance run, and Hackman put the finishing touches on the Y-D victory.

Due to league rules, there are no extra innings in any games this season, and doubleheaders cap at just seven innings.

Pickler was happy to get the victory but felt that they had let Bourne stay in the game too long by not taking advantage of opportunities to blow open the game.

Game two was all Bourne early on. In his first start of the summer, Connor Markl came out firing, striking out two in the first inning. In the second, however, he struggled with his command, walking four of the first five batters he faced to force home a run. A sacrifice fly added another run.

After his fifth walk in just 2.2 innings, Markl’s day was done.

PIckler expressed confidence in Markl’s ability after the game, citing his history of seeing guys struggle early pitching in the Cape Cod league but then seeing them come into form as the summer progresses.

“I thought his first inning, he was on fire,” Pickler said. “I really liked the way he attacked the first inning. He’s gonna be better the next time.”

Ivran Romero came in from the pen and shut down the Braves lineup, striking out eight over 4.1 shutout innings.

“Romero came in, closed the door, and was on fire the whole time,” Pickler said.

Down 2-0 without a hit heading into the sixth, the Sox were able to scrape across a run after a walk, a single, and two more walks, but went into the 7th still needing one to tie.

After Luke Shliger drew a walk with one out, he promptly stole second. He broke for third a few pitches later, and Jordan Thompson chopped a grounder to short. After a mishandled snag at first, Shliger broke for the plate and dove in without a throw to tie the game.

On the power of just one hit, Y-D had their second run and the game was tied at 2.

After a walk and an error made things tight in the bottom half of the 7th, Romero was able to strike out the side and preserve the tie, earning a point in the standings in a game where Y-D was shut down most of the night.

“Pretty satisfied,” Pickler said after game two. “We can play with anybody in this league.”

Just as he expressed confidence in Markl’s ability to come into form, Pickler is confident that the team will only continue to improve as a whole as well. Today, newcomers Chase Meidroth, Jack Costello, Jordan Thompson and Homer Bush Jr. each got their first ABs of the summer.

“As the guys get more comfortable with the wood (bats), and face more live pitching, understand each other and our system, we’re gonna be fine,” Pickler said with a smile after the game.

The Sox play their third straight against the Braves tomorrow, hosting Bourne at Red Wilson Field at 5 p.m.

Pas Ferreras fully participated in BP and pregame warmups and said he should be good to go tomorrow against Bourne, a welcome sign after there was fear of broken bones in his hand on a HBP.

Dylan Ray left between games to receive an X-Ray on his hand after taking a line drive in the first game of the doubleheader.