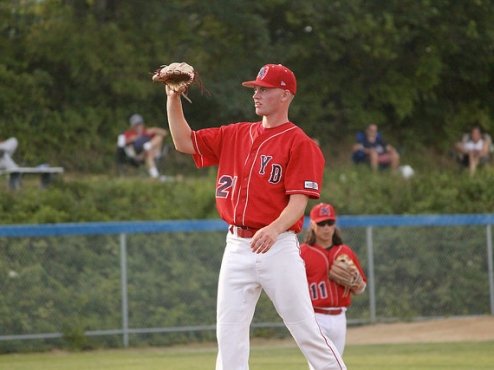 The stadium was quiet about an hour before the game at McKeon Park. Spencer Van Scoyoc ran slow jogs from the right field foul line. Y-D players had all filtered out of the dugout and away from the field to listen to a special guest speaker, but Van Scoyoc stayed back. ?He stood alone and prepared.

“Just to get loose,? Van Scoyoc said. ?It helps you keep focus, there aren?t any distractions.?

Spencer Van Scoyoc threw a gem in Y-D?s 10-0 victory over Hyannis on Thursday night. ?He and the rest of the pitchers put together a great outing to shutout the Harbor Hawks for the team?s sixth straight win. ?The staff got a little help from some sound defensive plays by a Y-D defense that has been dominant over the winning-stretch.

Alex McKenna provided two diving catches out of centerfield for the Red Sox. Red Sox middle-outfielders have shown off their talent over the past few games, with Kyle Isbel providing two spectacular catches of his own two games earlier at Harwich.

“I didn?t even turn around at first because I thought it was, for sure, a double,? Van Scoyoc said of McKenna?s first catch. ?(The Defense) saved me a couple of times.?

Van Scoyoc hit his spots well all game long. He recorded all four of his strikeouts in the first three innings of play in which he was off to a perfect start. He noted that in the beginning of the game that Hyannis wasn?t prepared for the offspeed which led to him getting the Harbor Hawks to swing and miss more often.

A pitch he pointed out to be working well was his curveball. He labeled it a his ?pitch to go to? and said he used it in all counts and as a punch out pitch.

Van Scoyoc was coming off his worst outing of the year after a brief absence from the rotation due to a small battle with strep throat. He responded in a big way to lower his earned run average to a 0.91.

Hunter Parsons came in to close the game for the Red Sox and retired the side on three straight solid defensive plays, one being yet another diving catch by McKenna. He expressed his gratitude with the defense?s everyday performance.

“Every game with this team there?s one or two web gems,? Parsons said. ?You got to really smoke the ball to get it through. Guys hit balls hard all the time, but they just keep making the plays.?

Parsons has been a reliable pitcher of one inning for the Red Sox all season and finished off nicely Thursday night. Brendan Nail, one of two Y-D relievers named to the CCBL east all-star team, was only in for one pitch to record the last out of the eighth inning.

Despite his short cameo, Nail offered a glimpse at the type of game the Red Sox defense was having. His first and only offering was drilled out to left field but was corraled by the sprinting Carlos Cortes. After seeing the catch made, Brendan Nail put his down, put on a snickering smile and shook his head in amazement. ?The bases were loaded and all three runners were left on base, Nail seemed to know he escaped one.

“That?s all I needed from him,? Pickler said of Nail?s shortened appearance. ?(The defense) made some great catches that kept us in the game, it changed the momentum our way.?

Van Scoyoc set the pace for the entire pitching staff and defense to play at and firmly re-established himself as one of Y-D?s more dominant pitchers.

The batter before Van Scoyoc recorded his final out, Daniel Robinson hit a screamer right back over the head of Van Scoyoc. ?He got his glove on it, but couldn?t make the catch as he promptly dodged out of the way to avoid injury. While he could?ve suffered some pretty bad damage had that play went wrong, his take away from it truly defines his will to be great.

“I just missed that one, it hit the tip of my glove,? Van Scoyoc said. ?It wakes you up a bit, but I saw it in the whole time and just missed it.?

Six innings into one of the Red Sox strongest outings of the season, fans can probably forgive.